Is this the latest fashion trend? 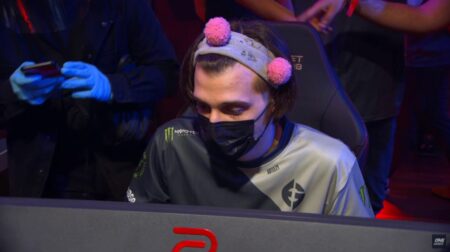 A grey headband with pink fluffy pom poms. It’s the last thing people would expect an esports pro to wear.

But carry player Artour “Arteezy” Babaev from Evil Geniuses thought otherwise as fans watched the Dota legend casually sporting the headband as he was getting ready for his upcoming match.

During an interview with Evil Geniuses, we had to ask what was the story behind this unique accessory.

According to Arteezy, his hair had grown out so he needed something to keep his hair out of his face. Originally he used regular hairbands but found that he frequently got headaches due to the bands constantly pulling at his hair. He found his girlfriend’s headband in his bag one day and has enjoyed headache free days since.

He went on to say that it has become somewhat of a lucky charm and will continue to wear the headband during his run with the team at the Singapore Major.

Evil Geniuses are set to play against PSG.LGD later today in the upper bracket finals in hopes of securing a slot in the grand final. We’ll find out if Arteezy’s headband really is lucky after all.