No one predicted OB.Neon finishing in the top six. 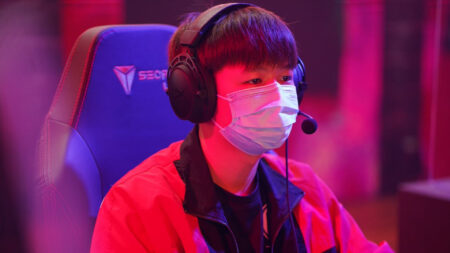 Day 3 of the Singapore Major Playoffs saw domination from Evil Geniuses as they knocked Invictus Gaming into the lower bracket, while PSG.LGD defeated tournament favorites Team Secret and dropped them to the lower bracket as well.

Then, it was OB Esports x Neon’s turn to shock everyone as they eliminated Vici Gaming from the Major. Finally, we saw Thunder Predator rise to the occasion and send Virtus.pro home.

Here’s a full recap of how every game played out.

Evil Geniuses opened up with a hero draft that featured three offlane heroes. They had Daryl “iceiceice” Koh as the primary offlaner, while Andreas “Cr1t-” Nielsen and Tal “fly” Aizik played the Pangolier and Tidehunter respectively.

Meanwhile, IG went with their own offlane strategy by having an Alchemist on Ren “eLeVeN” Yangwei who immediately farmed an Aghanim’s Scepter for his midlane Void Spirit.

Despite having a huge power spike in the mid-game, EG’s superior team fight heroes and ultimate hard carry Terrorblade, IG had no chance at all during the clashes. EG took the early 1-0 lead by finishing Game 1 in just 30 minutes.

Evil Geniuses finished the series with a traditional hero draft which had Arteezy’s Alchemist as its centerpiece. Invictus Gaming never really found a way into the game as all their heroes fell behind to EG in the laning phase. Arteezy’s Alchemist even tripled the networth of IG’s own hard carry towards the end of the game.

With Evil Geniuses 2-0 win over Invictus Gaming, they are now guaranteed a top 3 finish in the Singapore Major. They are now set to face PSG.LGD in an upper bracket final match tomorrow.

Team Secret answered back in Game 2 with a dominant performance that forced PSG.LGD to call gg at the 23-minute mark. Team Secret followed in Evil Geniuses’ footsteps and picked a hard carry Alchemist which completely took over the game. With Ame’s Monkey King falling way behind in gold and experience, PSG.LGD realized they had no way to get back into the game.

PSG.LGD pulled off the biggest upset of the tournament yet when they sent Team Secret to the lower bracket by defeating them in Game 3. Both teams were content with farming around the map but Matumbaman’s Phantom Assassin wasn’t anywhere near the net worth of PSG.LGD’s core heroes. To make matters worse, Team Secret had no team fight potential, which forced them to give PSG.LGD the map control advantage. Zhang “Faith_bian” Ruida’s offlane Lycan finished Game 3 with a perfect 12/0/11.

Vici Gaming won the first game mainly thanks to Neon allowing Yang “poyoyo” Shaohan and Xiong “Pyw”‘ Jiahan to get their Juggernaut and Shadow Shaman picks.

Neon had hoped that their hard carry Medusa would be able to carry them in the late game. However, VG was able to outplay their opponents in the early team fights.

After falling behind, Neon decided to play passively which worked towards VG’s favor. With poyoyo out farming all other heroes in the game, he became too much to handle and finished with a 14/0/9 KDA.

In the next game of the series, Neon answered back with an impressive global lineup with Andrei “skem” Ong playing his best hero, the Nature’s Prophet. Meanwhile, VG decided to go with the offlane Alchemist whose main purpose was to farm an Aghanim’s Scepter for his Gyrocopter and Void Spirit.

Unfortunately for VG, Neon did not give them any time to farm as both Spirit Breaker and Timbersaw continuously initiated fights. While VG targeted Neon’s tanky heroes, skem would teleport into the fight and burst down easy targets. Erin “Yopaj” Ferrer and Ejay “PlayHard” Banquil on the Puck and Pangolier also provided crowd control for Neon, which helped them even the series.

Neon Esports continued the upset train going when they demolished VG in Game 3. And to everyone’s surprise, Vici Gaming allowed Neon to draft the Puck and Nature’s Prophet again with their tournament lives on the line. This decision was the beginning of the end for VG as they were utterly dominated by Neon.

Instead of having a hard carry Nature’s Prophet, Neon gave the hero to Yang “Deth” Wu Heng in the offlane. This allowed Neon to have three major damage dealers with the Leshrac and Puck bursting down heroes with their AoE spells.

Over on the side of VG, their hard carry hero was forced to play defensively because of Neon’s early game pressure. VG heroes offered little to no resistance at the end of the game, as Neon Esports continued to extend their lead. Knowing that they had no way back into the game, Vici Gaming accepted their fate and called gg with the game ending with no final team fight.

OB Esports x Neon will face their biggest test yet when they face Team Secret in their next lower bracket elimination match.

Thunder Predator continued to prove that they’re the most consistent team in the Singapore Major as they opened up Game 1 with another clean-cut victory. Alonso “Mnz” León on the hard carry weaver and Leonardo “LeoStyle-” Sifuentes playing the midlane Windranger was too much for VP to handle in the late game. The two combined with an 18/2/20 KDA record.

Interestingly enough in Game 2, Virtus.pro allowed Thunder Predator to get their best heroes in the draft according to the team’s captain Rpmel “Mjz” Quinteros. Playing with their most comfortable heroes, Thunder Predator quickly made moves around the map with Joel Mori “MoOz” Ozambela’s position 4 support Earth Spirit applying pressure on all of VP’s lanes.

This allowed Mnz to free farm on the Troll Warlord while the rest of his teammates methodically hunted down VP’s heroes all over the map. As the game progressed, Thunder Predator’s lead continued to grow. At one point, Thunder Predator’s net worth gold lead jumped from 11,000 to 33,000 in 11 minutes.

After falling way behind, Virtus.pro continued to lose the remaining team fights as they lacked the proper hero draft to make a miraculous comeback.

With their 2-0 win over Virtus.pro, Thunder Predator advances further into the lower bracket. The Peruvian team will face Invictus Gaming in another lower bracket elimination match tomorrow.