Chaos Esports Club and Ninjas in Pyjamas are eliminated from TI9. 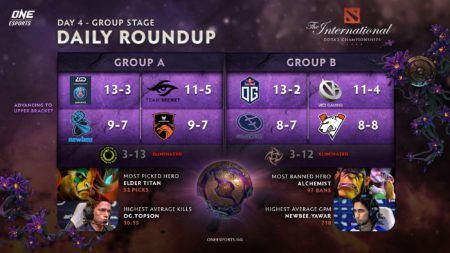 After four grueling days of non-stop Dota, the eight teams for the Upper Bracket at The International 2019 have been decided.

PSG.LGD, Team Secret, Vici Gaming and OG were pretty much expected to make it based on their strong performance, but Newbee, TNC Predator, Evil Geniuses and Virtus Pro were unexpected, to say the least.

Virtus Pro, in particular, had been floundering in the first three days, but rallied on the fourth day to claw their way to a well-deserved Upper Bracket spot. Similarly, Evil Geniuses rallied hard to earn themselves a berth as well.

Chaos Esports Club and Ninjas in Pyjamas, however, have been eliminated and will not play at main stage. Their lackluster performances saw them fall to pretty much every team in the tournament, only managing to tie three series each.