Unleash carnage on the Dota 2 battlefield as the cuddliest hero ever. 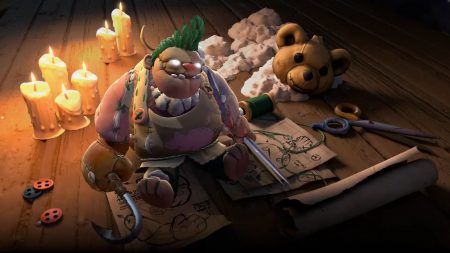 Valve has released the second Hero Persona for Pudge to owners of The International 2020 (TI10) Battle Pass. Called the Toy Butcher, the new persona turns Pudge from a fleshy monstrosity to a fluffy little stuffed toy.

The Toy Butcher Persona is unlocked at Battle Pass Level 255 and gives Pudge an all-new model, animations, as well as a revamped voice performance befitting his new, squishy self.

Here’s a preview of what the Toy Butcher Persona looks like:

In addition to the latest hero persona, the Voice of The International Announcer Pack has also been made available to all Battle Pass owners at level 75 and above.

Listen to the kill spree lines for the new announcer pack from Dota Cinema below:

The Pudge persona is the second of two hero personas that are expected to come with the TI10 Battle Pass, with the first one being the Disciple’s Path persona for Anti-Mage. The battle pass also features three new Arcanas, with the first two for Wraith King and Queen of Pain already available.

If you don’t have the time, don’t want to go through the grind, or simply have enough cash to throw around, then you can just buy your way to unlocking them all.

In total, you need to spend almost US$245 to get the TI10 Battle Pass and unlock all the Arcanas and Hero Personas without having to grind for free levels. As a bonus, buying your way there also unlocks a lot of the other features and goodies that the Battle Pass has to offer.