TI10 Battle Pass: The female Anti-Mage Persona is out now

You can now take control of Anti-Mage’s disciple as she begins her own crusade against all magic. 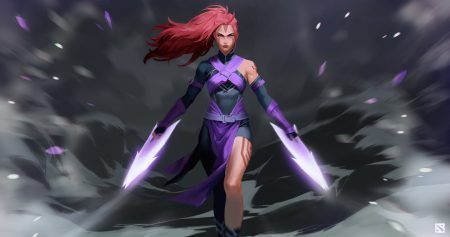 Valve has released the latest Hero Persona for Anti-Mage to owners of The International 2020 (TI10) Battle Pass. Called the Disciple’s Path, the new persona swaps Anti-Mage out for his female disciple, Wei.

The female Anti-Mage persona is unlocked at Battle Pass Level 305, and lets players take to the field as Wei, who has her own model, animations, hero portrait and icons, and voice lines.

Here’s a closer look at the new hero model for the persona:

The lore of the new persona reveals Wei as an orphan who was adopted by the Anti-Mage and trained in the lost arts of the Turstarkuri, the now-extinct group of magic-averse monks whose deaths drove the Anti-Mage to destroy all magic and those who use it.

Valve has also released a short comic that explains Wei’s entry into the battle of the Ancients. You can check out the comic, along with other details about the Anti-Mage persona, here.

The Anti-Mage persona is the first of the two hero personas that come with the TI10 Battle Pass to be released, with the second one being the Toy Butcher persona for Pudge. The battle pass also features three new Arcanas, with the first two for Wraith King and Queen of Pain already available.

If you don’t have the time, don’t want to go through the grind, or simply have enough cash to throw around, then you can just buy your way to unlocking them all.