How far can Team Aster go? 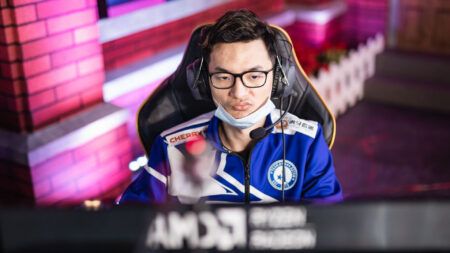 After a week of intense DPC 2021 upper-division action in the Chinese Regional League, Team Aster has emerged as one of the top contenders to advance to the first Dota 2 Major of the year.

Prior to the start of the season, three teams were expected to challenge in the Chinese region. The frontrunners were PSG.LGD and Vici Gaming, two organizations with proven track records of success at the highest level of competitive Dota, while right behind them was new superteam, Elephant, formed from the best players from PSG.LGD and Vici Gaming during the offseason.

However, after just one week, Team Aster has proven to be more than capable of challenging the top three.

Team Asters’ new midlaner, Liu “White丶Album_白学家” Yuhao — formerly known as “DD斩首” — has emerged as one of the best in the upper division.

In his match against Elephant, White丶Album only recorded one death in Team Aster’s 2-0 series victory. On top of that, his stats from all five games he’s played in were off the charts, with a KDA average of 6/3.2/12.2 alongside a gold and experience average of 639.4/671.2.

Dota 2 rosters usually go through growing pains at the beginning of the season, but Aster looks to be firing on all cylinders right now.

With Team Aster led by Chinese Dota 2 legend Zhang “LaNm” Zhicheng, they’re showing a level of coordination we didn’t expect from them. The team knows when to take fights and who to target first to progress resulting in the best possible outcome.

Rounding out the team are Du “Monet” Peng,  Lin “Xxs” Jing, and Ye “Borax” Zhibiao — formerly known as BoBoKa — three reliable veteran players who have experience competing at the highest level of Dota 2.

Team Aster currently sits in second place in the standings with a 4-1 record, right behind Vici Gaming. However, Team Aster’s schedule has been significantly harder, and they have wins over both PSG.LGD and Elephant.

Team Aster will get another chance to prove they’re true contenders when they face the undefeated EHOME squad on January 31.

READ MORE: This is the best possible Dota 2 lineup according to the DPC