The humblegod wasn’t so humble. 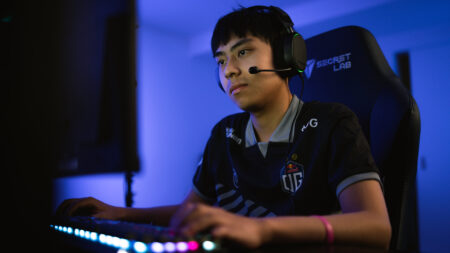 OG couldn’t have asked for a better return for Anathan “ana” Pham, as the two-time TI champions won their first match against Brame in the DreamLeague Season 15 DPC Europe upper division.

Ana and the boys certainly didn’t disappoint, cruising to victory in their opening match 2-0. The Dota 2 community was very impressed with how OG performed against Brame. In fact, the team’s hashtag, #DreamOG was even trending on Twitter after their win.

Ana’s return brought back the good old days for OG, as the team just looked like they were having fun playing together. While the game remained close from the early game towards the 20-minute mark, OG was never really in danger of losing because they knew each member of their team would make the right plays.

Despite being gone from high-level competition, ana showed us he still has it in him to be the best carry player in the world. In one specific instance, during a bottom lane clash in Game 1, ana escaped a chain stun by Manta dodging an incoming Rolling Boulder from the enemy Earth Spirit. And, in typical OG fashion, they finished Game 1 by fountain diving Brame.

The next game was even more ridiculous, as OG started their fountain dives early. OG could have easily taken down the Brame’s buildings and claimed the mega creep advantage. Instead, they decided to take fights inside the Dire fountain.

Brame even picked up a Divine Rapier for their hard carry Alchemist. But that still wasn’t enough, as ana and the rest of OG showed no mercy and kept killing Dire heroes in their own fountain. OG looked dominant with ana, and even showed some semblance of the same squad that won back-to-back TI championships.

ana’s stats in his first game back with OG

Ana didn’t miss a step in his debut, and OG look prepared and highly motivated to make another run at TI10. OG is next set to face Hellbear Smashers on April 28 at 3:00 a.m. GMT+8.