Alliance now await the winner of Secret vs Vici Gaming. 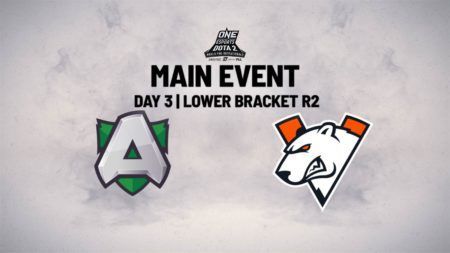 The third day of the ONE Esports Dota 2 Singapore World Pro Invitational Main Event kicked off with a Lower Bracket quarterfinal match between Alliance and Virtus.pro.

After three hard-fought games, it was Alliance who proved they were the better Dota 2 team and eliminated Virtus.pro from the tournament.

VP started the drafting phase by banning the Viper and drafting an Abbadon and Rubick for their first picks for Alexei “Solo” Berezin and Vitalie “Save-” Melnic. Then, they decided to take the Brewmaster, Troll Warlord and Shadow Fiend as their core heroes.

Meanwhile, Alliance went with three of the most popular heroes from the tournament with Magnus on the middle lane, a roaming Tiny, and a Doom Bringer as their offlaner.

With Simon “Handsken” Haag’s Tiny stealing a middle lane creep wave for himself early in the game, he was able to make plays for his teams by taking out Dire couriers and wreaking havoc in multiple lanes.

Alliance made an emphasis to force the action against VP by charging down the middle lane, forcing multiple Radiant heroes to help defend. But, the Dire team overextended after taking down VP’s cores and the rest of Radiant’s heroes were able to respawn and get return kills.

Alliance kept up their pressure, but they were shut down by a VP squad who had their entire team prepared for a team fight at the bottom lane. With most of Alliance’s spells and ultimates expended, VP ran down the Dire team and took down three of their heroes.

Limmp was able to break the deadlock by catching epileptick1d’s Troll Warlord and Skewered him away from his team. This gave Alliance the advantage during game one.

After a convincing win at the top lane where Alliance team wiped their opponents, VP tried to get the Aegis of the Immortal for themselves, but Nikibaby’s Blood Rite ability completely shut down the CIS team and they were forced to tap out of game one.

In game two, VP decided to give Vladimir “No[o]ne” Minenko a stronger middle lane hero with the Templar Assassin. Then, they drafted a Slark for epileptick1d.

In response, Alliance decided to go with another first picked Tiny, along with the Venomancer, Timbersaw, and a Faceless Void for Nikobaby.

Both teams had an even back and forth match for the first 10 minutes of the game. But VP eventually took control of the game with epileptick1d’s Aghanim’s Scepter buffed Slark and No[o]ne’s top net worth Templar Assassin.

During a fight by the Roshan pit, VP was able to win a team fight by a narrow margin, but Alliance decided to use their buybacks to take down the Dire team’s cores to equalize the game. Since the team fight reached the Dire tier two Tower, VP chose to burn their own buybacks to punish Alliance’s aggressive play.

Alliance tried to equalize the game, but Nikobaby struggled to land any team winning Chronospheres. Solo and Save-‘s performances during team fights were crucial in giving epileptick1d and No[o]ne the openings they needed to win team fights.

Nikobaby kept trying to catch VP off guard by using his buybacks while his team was eager to fight. But, instead of facing Alliance head-on, VP decided to disengage and continue to build up their lead.

VP closed out and equalized the series after taking down Alliance’s heroes with their mobile and versatile hero lineup with Slark, Batrider, and Templar Assassin. After 33 was caught and picked off outside the Radiant base, Alliance had all their heroes out of the game without buybacks, forcing them to call GG.

For the final decider game, Alliance picked Blood Seeker, Puck, and Brewmaster as their core heroes. Meanwhile, Virtus.pro went with the first-ever Alchemist pick for the tournament. They bolstered their line up with the Doom and Gyrocopter as their offlane and hard carry heroes.

Alliance made the decision to let No[o]ne’s Gyrocopter farm with little opposition in the middle lane. Instead, they chose to put a lot more pressure on the side-lanes and made sure Resolution and epileptick1d had terrible laning stages.

Fata made had a huge impact on the game by taking down VP’s heroes and saving his cores with his clutch swaps.

Alliance was able to take the gold lead away from VP by winning a team fight by the top Outpost where Limmp and 33 were able to keep the enemy Alchemist and Gyrocopter out of the team fight with their crowd control spells. Adrian “Fata” Trinks continued to land clutch swaps to save his core heroes.

Alliance continued to cake control of the game by outperforming their opponents during team fights by making it difficult for No[o]ne and epileptick1d to deal damage on the Alliance lineup.

Even with their Black King Bars up, VP couldn’t keep up with Alliance’s superior draft. Alchemist was able to take away the Aegis of the Immortal from Blood Seeker, but once Nikobaby was back up, Alliance immediately ran down epileptick1d and Resolution. This prompted Alliance to charge down the Radiant base, ending the series 2-1.

With their 2-1 victory, Alliance advances to the Lower Bracket semifinal where they’re set to take on the winner of Team Secret vs Vici Gaming.

After their loss to Alliance, Virtus.pro exit the tournament in fifth place and took home US$30,000 for their tournament effort.