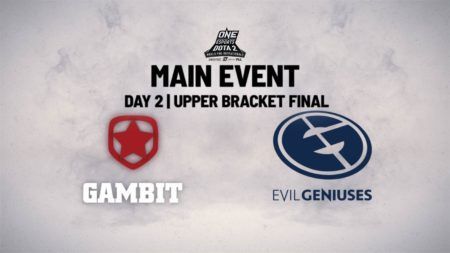 EG opened the series seemingly with the lategame in mind as Artour “Arteezy” Babaev was put on Naga Siren, with Abed Azel “Abed” Yusop on Razor and Roman “RAMZES666” Kushnarev on Beastmaster to lead the team through the midgame.

Abed and Andreas “Cr1t-” Nielsen on a roaming Position 4 Tiny heavily shut down gpk’s Invoker, killing him three times before the 5-minute mark to help their team come out of the laning phase with a slight gold advantage and Arteezy free farming.

The space EG got from Cr1t’s highly-effective rotations threw a wrench in Gambit’s game plan, as the latter lost their footing while their opponents snowballed out of control way too early.

An ambitious foray by the CIS team into EG’s jungle ended in disaster, as they gave away three big kills and control of Roshan. Gambit waved the white flag soon after, as EG took game one in just 22 minutes.

Gambit looked to bounce back from their demoralizing game one loss with a confident Antimage pick for dream, with gpk on a mid Ember Spirit and Shachlo on Dark Seer to bolster their ranks.

Meanwhile, EG looked to close the series out with a very strong teamfight composition, with Arteezy on Naga Siren again, Abed on Shadow Fiend, Ramzes on Tidehunter, Cr1t on Tiny once more, and Tal “Fly” Aizik on Disruptor.

EG led from the get-go once again and never looked back. Both of their supports somehow scored early solo kills on both sides of the map, which threw Gambit’s lanes in disarray. Cr1t’s Tiny, in particular, set up kill after kill for his team, including one where he tossed fng’s Viper right into a Requiem of Souls from Abed’s Shadow Fiend.

Gambit desperately tried to regain their footing in the game, but EG simply shut them down all over the map. It didn’t take long for an utterly demoralized Gambit team to tap out, with EG closing the series out at the 23-minute mark with the kill score at an extremely lopsided 32-6.

EG breeze through to the Grand Final and are looking unstoppable right now.

Meanwhile, a demoralized Gambit fall to the Lower Bracket Finals and will await their opponent from the results of the two Lower Bracket semifinals, which will be played tomorrow.

READ MORE: ONE Dota 2 Singapore Invitational Main Event Day 2 results: Vici Gaming get their revenge against TNC in a 2-1 thriller