ONE Dota 2 Singapore Invitational Main Event Day 2 results: Vici Gaming get their revenge against TNC in a 2-1 thriller

VG will now face Secret in the Lower Bracket quarterfinals. 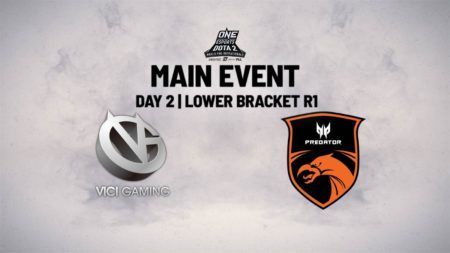 The best of two series was a rematch of the MDL Chengdu Major Grand Final, which TNC won 3-2.

Game one was a marathon match, lasting over an hour.

Vici Gaming decided to go with the Gyrocopter and Storm Spirit as their main damage dealers for Zhang “Eurus” Chengjun and Zeng “Ori” Jiaoyang. To bolster their lineup, they decided to go with a Centaur Warrunner for Zhou “Yang” Haiyang.

Meanwhile, TNC chose to go with the Lifestealer for Kim “Gabbi” Villafuerte and the Venomancer for Damien “kpii” Chok. To complete TNC’s lineup, the Filipino based team decided to go with the Kunkka for Armel “Armel” Tabios as their initiator and middle laner.

TNC had a rough start against VG, as Ori outperformed Armel in the middle lane battle by taking the last hit/creep kill score lead. With his experience lead, Ori started taking control of the game with his side-lane rotations.

TNC countered Ori’s aggressive playstyle by baiting Gabbi’s Lifestealer in the river where both Park “March” Tae-won and Timothy “Tims” Randrup used their ultimates to catch the Storm Spirit.

At the 22-minute mark, VG took down a split up TNC squad with a timely smoke gank and increased their gold lead by taking down three of the Dire heroes.

Ori decided to Ball Lighting across the river to catch TNC’s support heroes, but he was countered by Tims’ Doom Bringer yet again. Eurus was able to deal a good amount of damage against TNC’s lineup, but kpii’s Poison Nova ultimate along with Gabbi’s Life Stealer was able to outlast VG.

TNC and VG kept trying to gain better engagement angles against one another but without much success.

Eventually, it was VG who decided to commit to a team fight after Ori’s buyback was spent. Gabbi was able to force Eurus to use is Black King Bar early, and TNC was able to kill the Gyrocopter when VG decided to reengage against TNC.

Tims decided to commit the Doom on the Centaur Warrrunner, causing Ori’s Storm Spirit to Ball Lighting right into March’s Winter Wyvern and go down to Winter’s Curse ultimate. Meanwhile, Xiong “Pwy” Jiahan had some questionable Tiny Toss throws during the team fight.

With TNC amassing a huge gold lead against VG, Eurus decided to go with a Divine Rapier on his Gyrocopter. After killing Roshan and getting the Aegis of the Immortal for Eurus, VG decided to go down the middle lane and apply pressure. However, TNC was able to stun-lock the Gyrocopter with the Torrent and Blink-Stop combo from Armel and Tims and force VG to retreat.

Without the Aegis of the Immortal advantage, TNC was able to focus down Eurus’ Gyrocopter and take the Divine Rapier for themselves. TNC quickly ran into the Radiant base and finished the first game after 64 minutes of play.

In the next game, TNC decided to go with a Phantom Lancer hard carry for Gabbi, a Puck for Armel at the middle lane and a Beastmaster for kpii.

In response, Vici Gaming went with an unconventional draft with Yang as their offlaner on the Earthaker, and Ori playing the midlane Timbersaw. The Chinese team had Eurus on the Morphling as their primary damage dealer.

Similar to the previous game, VG dominated the laning stage but TNC was able to keep up thanks to their support heroes rotating at the mid and bottom lane.

TNC attempted to split-push with Armel’s Puck, but VG was prepared for all of the Dire team’s strategies.

TNC was able to catch VG’s Earthshaker with kpii’s Beastmaster Roar and win a crucial team fight. With their offlane stunner out of the picture, TNC was able to turn and take out three VG heroes and force Ori to retreat.

But VG was able to regroup and continue to build up their lead by cutting off the map for TNC. With nowhere else to farm, Tims and kpii tried to create space for Gabbi for his items. This gave VG the opportunity to take down more Dire heroes and balloon their gold lead to 20,000.

TNC tried their best to defend their base, but VG was so far ahead that all of the Dire heroes became easy targets for Eurus and Yang. TNC decided to tap out of game two, leading to a game three decider.

In the deciding game three, TNC picked up the Morphling for Gabbi, with Armel on a middle lane Leshrac and kpii on Brewmaster to back him up.

VG ran with Eurus on Slark and Ori on Viper, with Yang on an offlane Abbadon to shield against their opponents’ burst-heavy composition.

VG came out of the laning phase with a significant gold lead, though they were unable to shut down Gabbi’s Morphling from having the good start he needed.

With that said, TNC was still able to keep up with VG by linking together their area of effect spells after Pyw decided to Glimpse back March’s Grimstroke. Immediately after the fight, Gabbi underestimated Eurus’ Slark, who already had an Aghanim’s Scepter.

Gabbi continued to struggle as the game continued. His Morphling tried to get farm away from the Slark, but Pyw and the other VG heroes focused on hunting him down.

TNC were able to pull off some improbable holds against the VG onslaught, and an Aghanim’s Scepter pickup for Eurus’ Slark (who also had a Basher) and pyw’s Disruptor were key in locking down Gabbi’s Morphling in the decisive clash that sealed the deal for the Chinese team.

At the 38-minute mark, VG decided to apply more pressure to the Dire base and forced TNC to defend their Towers and Barracks. This caused the Dire heroes to retreat back to the Fountain to heal, and this is where Gabbi made a critical mistake where he failed to Morph more strength to survive. Without their hard carry, TNC was forced to tap out of the game, ending their tournament run.

With their 2-1 victory, Vici Gaming advances to the Lower Bracket quarterfinals, where they’re set to face Team Secret in a best-of-three elimination match.

This will be the first time the teams have faced each other since Team Secret eliminated Vici Gaming from The International 2019.

Meanwhile, TNC Predator ends their ONE Esports Dota 2 Singapore World Pro Invitational campaign in seventh/eighth place and take home US$10,000 for their efforts.