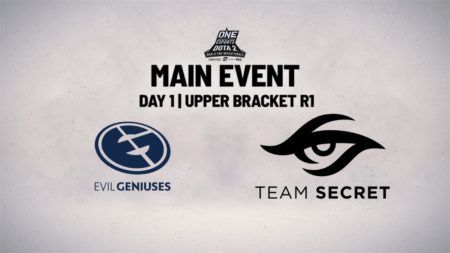 The second match of Day 1 of the ONE Esports Dota 2 Singapore World Pro Invitational Main event saw Evil Geniuses facing off against Team Secret in a best-of-three Upper Bracket round 1 match.

Team Secret decided to go with a timing-based lineup, with a Beast Master, Weaver, and Pugna in the middle lane for Michal “Nisha” Jankowski. Meanwhile, EG drafted heroes that would eventually outscale their opponents during the late game. Abed “Abed” Yusop was given the Templar Assassin and Artour “Arteezy” Babaev played the Blood Seeker.

Both Roman “Ramzes666” Kushnarev and Ludwwig “zai” Wahlberg were given the top lane to themselves. Team Secret gave priority farming to the Beast Master and Pugna, while EG wanted to make sure their Tide Hunter had the proper magic resistance items up for when their opponents pushed their lanes.

Evil Geniuses properly avoided Team Secret’s hero lineup, who were trying to make the most of their mid-game power spike. Even when they were able to catch Arteezy’s Blood Seeker, Secret failed to take advantage, and could not amass a gold or experience lead.

Team Secret kept trying to make plays around the map, but EG was able to counter both of their pressure plays.

Ramzes666 managed to take away the Aegis of the Immortal from Team Secret. Then, he landed a timely Ravage which gave EG control of game one.

EG extended their lead against Team Secret by catching out Nisha and Matumbaman, and Arteezy’s Blood Seeker was able to shut down the enemy Weaver with his Rupture and Blood Rite hero abilities.

Zai on the Doom Bringer totally disabled Nisha’s Pugna with his ultimate. And with Team Secret’s main damage dealer eliminated, EG demolished their European opponents and closed out game one a few moments later.

In game two, Team Secret chose not to ban the Templar Assassin, which Evil Geniuses took as their first hero of the draft. They then decided to finish their lineup with the Omniknight for Ramzes666 and a Gyrocopter for Arteezy.

Meanwhile, Team Secret went with the popular Magnus mid hero for Nisha, and a Blood Seeker for Matumbaman.

Evil Geniuses surprised their opponents by adopting an aggressive playstyle, with Cr1t- making plays on Tiny. The action continued around the map where both Arteezy and Matumbaman secured kills off each other in the top lane.

EG continued to chase after Team Secret all over the map. Initially, both teams traded kills evenly, but EG eventually took full control of all the lanes.

Team Secret’s mistakes kept piling up and EG made sure they capitalized on every one of them. Yeik Nai “MidOne” Zheng and Nisha’s teleportation timings were totally off, and this gave EG the opportunity to take down the Dire heroes one by one.

Even when Team Secret grouped up as five heroes and used their ultimates together, they still lost to the North American team who clearly had better team synergy during the series.

Team Secret had to use three of their team fight ultimates to take down Ramzes, which showed just how far behind they were against EG.

Evil Geniuses closed out the series by eliminating Matumbaman outside the Dire base and picked off the remaining Team Secret heroes to win game two.

After stomping Team Secret 2-0, Evil Geniuses have secured a top-three finish at the tournament and are now set to face Gambit Esports in the Upper Bracket Finals.

Meanwhile, Team Secret drops to the Lower Bracket where they await the winner of the Vici Gaming vs TNC Predator matchup.