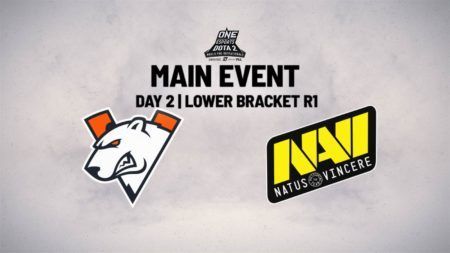 Day 2 of the ONE Esports Dota 2 Singapore World Pro Invitational Main Event kicked off with a Lower Bracket round 1 match between two powerhouse CIS teams: Virtus.pro and Natus Vincere.

Na’Vi opened the series with a strong ranged core duo in Drow Ranger for Vladislav “Crystallize” Krystanek and Templar Assassin for Idan “MagicaL” Vardanian, with Pavel “9pasha” Khvastunov on Underlord as a tanky frontliner.

VP countered with a high-damage duo themselves, with Egor “epileptick1d” Grigorenko on Gyrocopter and Vladimir “No[o]ne” Minenko on Viper, with added teamfight control from Roman “Resolut1on” Fominok on Centaur Warrunner and Alexey “Solo” Berezin on a position-5 Warlock.

With stronger lanes on their side, VP handily won the laning phase and enjoyed a 10-3 kill lead and 4k gold advantage 15 minutes in.

With Crystallize’s Drow Ranger struggling in particular, it fell to MagicaL on Templar Assassin to pick up the slack as Na’Vi tried to make as much space on the map as they can.

After claiming Roshan at the 21-minute mark, VP amped up their aggression and began sieging Na’Vi’s base. While Na’Vi repeatedly split-pushed around the map to try and delay the game, they were continually getting picked off.

VP were eventually able to force the straight-up fight they needed to open up Na’Vi’s base, but Na’Vi were still able to mount a considerable defense.

Despite Na’Vi’s base efforts — exemplified by a Divine Rapier pickup on Magical — VP was able to close the game out after 43 minutes.

Na’Vi looked to bounce back in game two with Crystallize on Drow Ranger once more, with MagicaL on a mid Razor and 9pasha on Omniknight to back her up.

Meanwhile, VP confidently first-phase picked Medusa for epileptick1d, with a mid Puck for No[o]ne to create space and Resolut1on taking up the offlane Underlord to protect the team.

Na’Vi went on the offensive early to ensure they won the crucial laning phase against Medusa, but No[o]ne threw a wrench in their plans when he turned a Na’Vi gank on the top lane around while getting an Ultra Kill. That gave VP the momentum to start taking over by the midgame, with No[o]ne’s elusive Puck leading the way.

Na’Vi’s Bakyt “Zayac” Emilzhanov on a Position 4 Doom swung the tides back in Na’Vi’s favor when he isolated No[o]ne’s Puck to shut down VP’s teamfight, which led to epileptick1d getting left behind by his team and eventually taken down.

Zayac continued to win the succeeding engagements for Na’Vi, as he repeatedly isolated their cores to give his team a fighting chance.

However, Na’Vi lost a crucial fight for Roshan that gave VP the opening they needed to further siege their base.

Crystallize’s Drow Ranger was caught without buyback in that defense, which let VP close out the series in just under 50 minutes.

With their win, VP move on to the next round of the Lower Bracket where they will face Alliance.

READ MORE: Dota 2 Outlanders meta: What we learned from the ONE Esports Singapore Invitational Group Stage