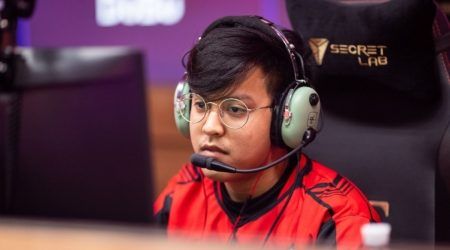 Execration announced in a post on their official Facebook page that Karl will be joining them to replace Argle “Ken” Llesis, who will be taking a temporary break from competitive play due to health issues.

This will be Karl’s second stint with Execration as he first joined the team back in September 2018. He left for Team Amplfy in February 2019 then joined Geek Fam in December of that year.

“We would like to welcome Karl “Santino” to the family. We are excited to have him again in the team and we hope to bring our supporters the best gameplays that they expect from us,” said Execration.

Karl is a longtime veteran of the Philippine Dota scene, having started his professional career at a very young age under the moniker Santino back in the days of the original Defense of the Ancients mod for Warcraft III.

He finally had his breakthrough internationally with Geek Fam, helping the team win back-to-back titles at the BTS Pro Series: SEA Season 2 and the ONE Esports Dota 2 SEA League to become the top team of the Southeast Asian scene this season.

However, Geek Fam quickly lost their hold over the top spot in the region after they lost star carry player Marc Polo “Raven” Fausto to Fnatic at the end of July. With the continued suspension of the Dota Pro Circuit as a result of the ongoing coronavirus pandemic, Geek Fam announced that they have unfortunately disbanded their Dota 2 squad.

After his successful stint with Geek Fam, Karl will be a welcome addition to Execration’s all-Filipino roster comprised of promising young players and longtime veterans.