Revenge is a dish best served at TI10. 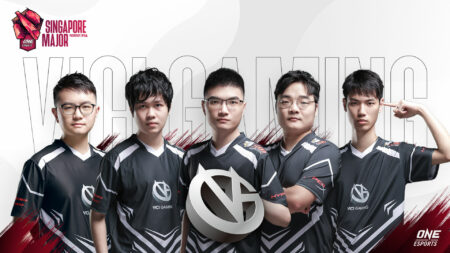 At The International 2016, Lu “Fenrir” Chao and Ren “eLeVeN” Yangwei participated in what’s considered one of the greatest Dota 2 matches of all time when EHOME went up against Evil Geniuses in game one, round two of the upper bracket.

It was a brutal 75-minute game that saw both teams put on a Dota 2 masterclass. In the end, Evil Geniuses took the first game, and EHOME’s loss hit them hard.

Game two was a much shorter affair, lasting only 38 minutes, a one-sided win for Evil Geniuses again.

Five years after eLeVeN’s heartbreaking match, he and old teammate Fenrir finally got their chance to play against Evil Geniuses again at TI10.

This time, they managed to get their revenge.

Before the match began, the TI10 panel presented information about the players going into the match. While eLeVeN still plays Dota 2 competitively, his former teammate Fenrir is now the coach of Vici Gaming.

The first game went well for Evil Geniuses. While the laning stage was even for both teams, Azel “Abed” L. Yusop was able to pop off in the midlane on Ember Spirit and create an incredible amount of space for his team.

Evil Geniuses took a fight at the 18-minute mark which killed off all the members of Vici Gaming. After such a strong performance, Vici Gaming tapped out at just 22 minutes in.

Game two of the series had similar undertones to the TI6 battle eLeVeN had with Evil Geniuses, as Captain Ding “Dy” Cong decided to pick Enchantress and Monkey King to counter the vision provided by iceiceice’s Beastmaster.

The vision advantage cost Vici Gaming in game one, and they were not going to repeat that mistake again. Still, despite the counter picks, iceiceice was able to use his Hawks to secure three kills 17 minutes in.

As such, game two slowly started to favor Evil Geniuses, but eLeVeN stepped up, and reminded everyone why Vici Gaming is one of the best teams in China.

With a beautiful blink and Skewer combo on Magnus, eLeVeN was able to bring Artour “Arteezy” Babaev’s Razor into his base for his allies to knockout and stop the push.

After a strong base hold, both teams managed to get pickoffs on each other, with neither team ever having more than a 5,000 gold advantage.

Unfortunately, Evil Geniuses draft ran into issues in the late game. While the carry and midlaners from both teams scale relatively equally, Magnus provides far more team fight and control than Beastmaster.

eLeVeN proved that by landing a magnificent Skewer and Reverse Polarity combo that turned what was almost a guaranteed loss for Vici Gaming into a victory.

The series was tied 1-1, but it felt like Vici Gaming had the momentum entering game three.

As such, Evil Geniuses decided to go another route for iceiceice, and picked Legion Commander instead. On this hero, he even managed to escape a three-man ambush in the early game.

Evil Geniuses had one game plan: get Arteezy as farmed as possible, and go to the high ground early. They decided not to starve out Vici Gaming, but instead end it fast due to how hard Yang “poyoyo” Shaohan’s Spectre would scale later on.

This was a risky move, but Vici Gaming was ready for it. Dy on support Monkey King set up a perfect Wukong Command for his team, baiting Evil Geniuses to fight him, but it was a bad fight on the Radiant high ground, which caused them to lose four.

After that fight, the gold and experience advantage swung into Vici Gaming’s favor. In full control of the game, they managed to close it out 15 minutes later.

Vici Gaming will face off against T1 next at TI10

After the victory, eLeVeN sat down with Frankie Ward to discuss the match. When asked about whether it was a mistake for Evil Geniuses to take Troll Warlord in game three, eLeVeN said, “For this patch, Troll Warlord is not great. I know their backs are against the wall. It’s not a good choice.”

Frankie followed up by asking if it felt bad to eliminate iceiceice, an old teammate from EHOME, out of the tournament.

Jokingly, eLeVeN answered, “If it’s someone else I’d feel sad, but since it’s iceiceice, it feels great.”

Vici Gaming’s next TI10 match be against T1 will take place on October 15. Catch all the matches broadcasted live on the Dota 2 The International official Twitch channel.