Learn how to wreck games as Monkey King support from BOOM.Tims

He is the King for a reason. 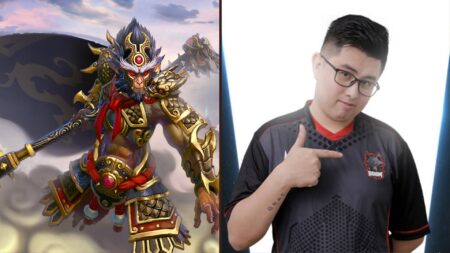 BOOM Esports went back in time and revived one of the most interesting hero archetypes in the history of Dota 2 — Monkey King support.

Timothy John “Tims” Randrup surprised by picking Monkey King support in the grand final of the BTS Pro Series Season 8 SEA between BOOM Esports and Team SMG, which they won 3-2.

During the grand final, BOOM Esports picked Monkey King in three games, and racked up a 100% win rate on this hero. Team SMG also prioritized the hero and picked him twice, nabbing two wins.

Tims recently joined BOOM Esports after being on TNC Predator’s roster for almost five years. Tims was a highlight for the team, known for his aggressive roaming style on heroes like Earth Spirit, Rubick, and Earth Shaker.

Monkey King has primarily been picked as a core hero since his release. He had a short stint as soft support when Wukong Command proc’ed items. As such, Monkey King support preferred items like Skull Basher which allowed him to utilize Wukong Command as a large AoE stun.

This was updated quickly after Dota 2 patch 7.06 was released, which ended Monkey King’s career as a support, until Tims came along and demonstrated how strong the hero can be in this role.

Monkey King was undoubtedly one of the biggest winners of the Dota 2 patch 7.30 balance update. Here are the buffs he received:

Monkey King was effectively given a free Aghanim shard upgrade. Tree Dance cast time was reduced to 0.1 seconds, making it nearly impossible to stop Monkey King from using that ability. The travel speed was also increased.

Tims showed the value of Tree Dance in this team fight, where he provides vision for his teammates to jump in and take out Damien “kpii” Chok’s Vengeful Spirit and Tue “ah fu” Soon Chuan’s Nyx Assasin.

The second spell Tims focused on was the Boundless Strike. This ability was buffed in Dota 2 patch 7.29, which now has a shorter cooldown and longer stun duration at earlier levels.

BOOM Esports provided a lot of space for Tims

Monkey King is often played as a carry, so players have a firm understanding of how to maximize his damage in the late game, taking advantage of his Jingu Mastery.

While Tims played Monkey King as a support, he approached it with a core-like mentality. He spent a lot of time in the game ensuring he kept his networth up and prioritized damage items such as Echo Sabre and Skull Basher, shunning standard support items like Force Staff and Glimmer Cape.

This resulted in BOOM Esports having a four-core line-up during the late game. However, it was a greedy pick, which BOOM Esport’s offlaner Saieful “Fbz” Ilham had to shoulder. Not doubt, these types of draft require a lot of team synergy and trust in the Tims to perform.

BOOM Esports were crowned champions of the BTS Pro Series Season 8 SEA and took home US$24,000 after a thrilling 3-2 victory over Team SMG, an excellent debut for the new squad.