5 Major debuts to look out for at the Singapore Major 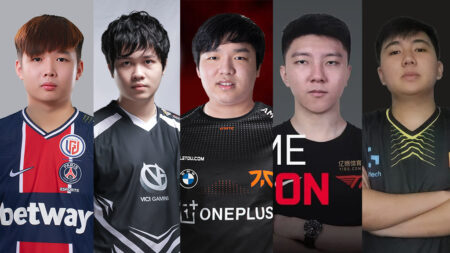 With the Singapore Major just ten days away, the teams are locked in and ready to compete for the US$500,000 prize pool. While there are plenty of familiar faces returning to Dota Major action, there are also some young up-and-comers making their Major debuts.

Here are five Major rookies we’ll be keeping an eye on at the Singapore Major.

All of Southeast Asia will be watching Erin Jasper “Yopaj” Ferrer as he takes the stage with his teammates at the Singapore Major after Neon’s phenomenal run in the SEA upper division.

Having come a long way since starting his career in 2019, Yopaj has grown into a mechanically skilled monster with a wide hero pool that includes his signature Earth Spirit. His preference for aggressive lane dominators has forced many teams into a corner during the drafting and laning stage. The Singapore Major will be his first chance to really prove himself against teams from Europe and China and we’re looking forward to seeing if he can rise to the challenge.

Originally from Malaysia, midlaner Cheng “NothingToSay” Jin Xiang has a lot to show for his time spent playing in the Chinese scene.

Currently on loan to PSG.LGD from EHOME, NothingToSay has grown from an inconsistent SEA pub star to a patient opportunist. You’ll normally find him creating space for his carry on elusive meta mids such as Ember Spirit, Puck and Void Spirit.

With the Singapore Major fast approaching, will all his training under the watchful eye of Zhang “xiao8” Ning finally pay off?

Originally picked up as a stand-in for 23savage who couldn’t travel due to COVID-19 restrictions, Yang “poyoyo” Shaohan has proven that he can stand toe-to-toe with some of the best teams China has to offer.

While poyoyo’s inexperience can show at times, his ability to flex between farming or fighting has proved invaluable to Vici Gaming. Teams will need to be wary if he can get his hands on Drow Ranger or Troll Warlord, two heroes that VG has had a lot of success with.

Until now, poyoyo has only been exposed to the Chinese meta and has no experience against International teams. We’ll soon find out if he’s ready to take on the big leagues.

Considered one of the best position five players in the SEA scene, Matthew “Whitemon” Filemon has earned his well-deserved reputation over three years of competitive play in the region.

It’s rare to see a support player who has as much impact in the early game as Whitemon does whilst also having the lowest networth. Despite the lack of networth, Whitemon somehow manages to make it almost impossible for enemies to target him in teamfights thanks to his godly positioning.

He excels at active supports such as Disruptor, Crystal Maiden, and Grimstroke who only need levels to function whilst also being huge threats if left unchecked.

An offlaner who seemingly came out of nowhere in 2020, the Singapore Major will be Natthaphon “Masaros” Ouanphakdee’s biggest opportunity to prove himself and break into the top-tier of Dota 2 superstars.

The Thai player favors hard-to-kill utility offlaners such as Legion Commander, Tidehunter and Dragon Knight, who typically have great laning capabilities. Not only does Masaros always pose a threat to laning enemy carries but he also takes the burden off his supports who can invest their time and resources into pressuring other lanes if need be.

READ MORE: Here’s the real reason why Dota is called ‘Defense of the Ancients’