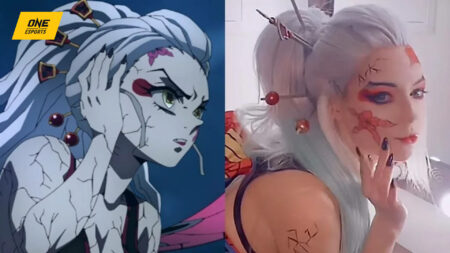 The ending of the second season of the phenomenal anime series Demon Slayer (Kimetsu no Yaiba) was nothing short of impressive. In gorgeous Ufotable animation, the ending highlighted the bloody battle between the Demon Slayer Corps and the Twelve Kizuki’s deadly Upper Moon 6 duo Gyutaro and Daki.

Daki, in particular, caught the eyes of many anime fans not just because of her beauty and attitude, but also because of her genuine love for her brother.

We can’t take our eyes off this Daki cosplay

MiLKey’s cosplay featured Daki’s demon appearance, complete with pale skin, long black nails, and black cracks all over her body. Of course, she also had the villain’s signature pink flower-like demon crest on her face, which matches the character’s terrifying obi sashes.

The whole costume, which consisted of Daki’s sexy two-piece garment tied with a huge obi, was sewn and crafted by MiLKey herself, according to her Instagram post.

Another photo showed the Daki cosplayer being burned by Nezuko’s Blood Demon Art as seen in the manga and anime series. Daki has developed a fear of fire especially after being burned alive during her human years.

READ MORE: Who is Doma in the Kimetsu no Yaiba Entertainment District Arc finale?