Fans have so much to look forward to. 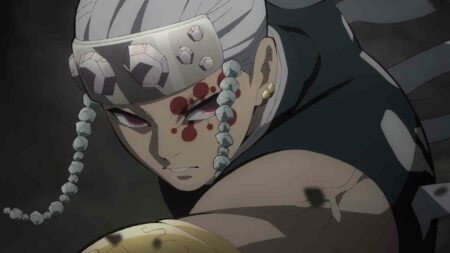 The Demon Slayer Entertainment District Arc was a wild ride that introduced us to memorable characters like the flamboyant Sound Hashira, Tengen Uzui, and demon siblings Daki and Gyutaro.

The final episode of the season calls for a Demon Slayer Entertainment District Arc ending explained analysis that will give us a better idea of the enigmatic Twelve Demon Moons, along with the challenges and characters fans can meet on the horizon.

So, if you’re still reeling from that explosive conclusion, here’s everything you need to know.

Warning: Spoilers if you have yet to watch the Demon Slayer Entertainment District Arc.

How did Nezuko Kamado’s Blood Demon Art save Tanjiro, Inosuke, and Tengen?

In the final episode, the series’ main characters – Tanjiro, Nezuko, Inosuke, and Zenitsu – were reunited after their harrowing mission, with Tanjiro discovering that his sister is capable of using her Blood Demon Art to burn away poison within people’s bodies.

Due to Nezuko’s unique condition in that she has never devoured a human, the flames she produces are harmful only to other demons and objects of demonic origin.

In the past, she manipulated these flames to burn Lower Rank Five demon Rui’s threads. Nezuko was able to use her power in that same way to eliminate Gyutaro’s poison which was slowly killing Tanjiro (though this was done off-screen), Inosuke, and Tengen.

Why did the Serpent Hashira, Obanai Iguro, appear at the end?

As one of the Hashira that made an appearance during Tanjiro and Nezuko’s trial, Obanai has maintained an interest in the Kamado siblings because of their unusual circumstances. Before the current arc, he was last seen receiving news of Flame Hashira Kyojuro Rengoku’s death, and staring off into the distance in disbelief.

Obanai made his return in the final episode of the Entertainment District Arc to congratulate Tengen for defeating members of the Upper Rank of the Twelve Demon Moons.

Upon finding out that the Sound Hashira intended to retire, Obanai tried to pressure Tengen into staying on, citing they had already lost so many lower-ranking Demon Slayers who failed to reach their potential. To this, Tengen responded that they were actually still growing, having witnessed Tanjiro’s development.

Who was the mysterious Upper Moon demon that appeared in the finale?

The antagonist that appeared in the flashback scene of Daki and Gyutaro’s origin story is Doma, a member of Kibutsuji Muzan’s Twelve Demon Moons. He is an iconic villain in the franchise who is best known for his rainbow-colored eyes.

Doma is introduced in the anime similar to how he was presented in Chapter 96 of the manga, in which he is seen devouring a geisha in Yoshiwara. This was where he met Daki and Gyutaro, and when he eventually turned the siblings into demons themselves.

In the flashback, Doma was shown to be Upper Six of the Twelve Demon Moons, and fans will be excited to find out where he is placed in the present. They may be able to find out more once the Swordsmith Village Arc premieres.

Why was Kagaya Ubuyashiki so thrilled about an Upper Moon being defeated?

Kagaya Ubuyashiki, also known as Oyakata-sama or Master, is the leader of the Demon Slayer Corps, and is often seen communicating with the Kasugai Crows for updates on how the corps members are fairing.

Like Obanai, he was shown at the end of the episode, rejoicing that Tengen and the main protagonists had managed to defeat demons of the Upper Rank. Kagaya also revealed that their situation against demons had remained unchanged for a hundred years prior to this achievement.

Kagaya predicted that the ripples would continue to spread and eventually reach Muzan Kibutsuji himself, thereby giving the Demon Slayers a fighting chance at defeating the show’s Big Bad within the current generation.