Who is Yoriichi Tsugikuni in Demon Slayer?

Remarkably, he strikes fear in Muzan. 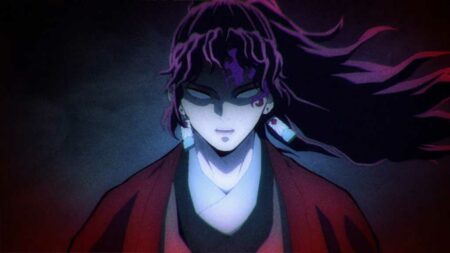 The explosive finale of Demon Slayer’s Entertainment District Arc certainly left viewers with quite a few questions moving forward. What are the remaining Hashira like? What manner of deadlier villains will Tanjiro and his friends meet next? And who was Yoriichi Tsugikuni, the mysterious man that Daki saw in – what she realized were – Muzan’s memories?

With the Swordsmith Village Arc currently in production, fans will possibly have to wait until the start of 2023 for their answers. But that doesn’t mean we can’t do a little digging of our own.

Warning: Major spoilers if you have yet to watch the Demon Slayer Entertainment District Arc or for those who haven’t read past Chapter 96 of the manga.

Who is Yoriichi Tsugikuni?

First appearing in episode eight of the Asakusa Arc during a look at Muzan’s past memories, Yoriichi Tsugikuni becomes a major supporting character in future arcs.

He was a legendary Demon Slayer, responsible for creating the Breathing Styles which many of the characters use. He was also, more importantly, known for the Breathing Style passed down in the Kamado family, Sun Breathing, which the main character Tanjiro Kamado hopes to learn more about.

He appears in a flashback after Muzan orders his henchmen to specifically kill Tanjiro, emphasizing that the latter wears Hanafuda earrings. What is more intriguing about the moment is how the series’ main villain is seen visibly trembling at the reminder of Yoriichi Tsugikuni, who also sports Hanafuda earrings.

In the sixth episode of the Entertainment District Arc, after Daki uses her sashes to wreak havoc, resulting in numerous deaths, Tanjiro seethes at her in anger and asks why she torments humans, who are far weaker than demons.

This act triggers a memory of Muzan’s that Daki can experience because she consumed the Demon King’s blood, in which she relives his encounter with Yoriichi Tsugikuni. Though the flashback comes in snippets, we are shown that Muzan and Yoriichi likely fought to the death.

Who is Kazuhiko Inoue?

Kazuhiko Inoue began his voice acting career in 1975 when he debuted as Tetsusai in the Japanese historical comedy anime Ikkyū-san. He is best known for his roles as Kars in JoJo’s Bizarre Adventure, Kakashi Hatake in Naturo, and Glidarts Clive in Fairy Tail.

The 67-year-old recently won Best Supporting Actor in the third Seiyuu Awards for his role as Nyanko-sensei in Natsume’s Book of Friends (Natsume Yūjin-chō).

READ MORE: Who is Mamoru Miyano, the voice of Demon Slayer antagonist Doma?