Who is Makima in Chainsaw Man? Story, personality, and first appearance Chainsaw Man is revving up to be one of the most hyped anime releases of 2022, but some of you might not be too familiar with the story.

To get you acquainted with the big names in the series, here’s a quick introduction to Makima in Chainsaw Man, including details on her background story, personality, and first appearance in the manga.

Warning: Spoilers if you haven’t read the first 27 chapters of the Chainsaw Man manga.

Who is Makima in Chainsaw Man? 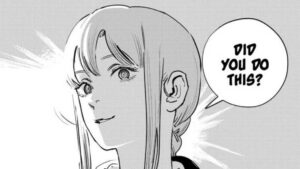 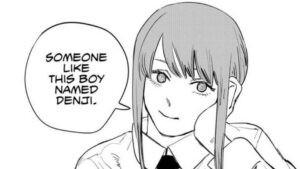 Makima is one of the main characters of Chainsaw Man, a horror-comedy manga series written and illustrated by Tatsuki Fujimoto. The series is set in a world where devils manifest from human fears.

As a high-ranking Public Safety Devil Hunter and leader of Tokyo Special Division 4, she is tasked to eliminate the Zombie Devil. Arriving at the scene to find the target already slaughtered by the human-devil hybrid, the young red-haired woman dressed in a suit and tie is puzzled by Denji’s undetectable scent.

After Denji returns to his human form following a surprising embrace from Makima, she gives him two options: either be killed or become her pet. Denji is overjoyed at the thought of being properly fed and decides to be her pet.

With Denji now under her care, Makima assigns him to Special Division 4, an experimental squad made up of powerful hybrids, fiends, and humans. Denji ends up living with two of his squadmates, Power and Aki Hayakawa.

Makima in Chainsaw Man keeps a close eye on Denji and often gives him attention and quality time to keep him loyal to her command. Being a firsthand witness to the hybrid’s abilities, she knows just how powerful Denji can be.

While she takes on this role of Denji’s love interest, she is shown as an enigmatic character in the first arcs of the Chainsaw Man story.

Her primary goal as a Public Safety Devil Hunter is to defeat the Gun Devil, but when their Division is attacked out of nowhere, she shifts her agenda to keeping Denji safe from other nations who want to use him as a superweapon.

Makima in Chainsaw Man occasionally demonstrates her strength and abilities in crucial situations.

During an assassination attempt by Gun-Agents on a train to Kyoto, she miraculously survives with no serious wounds. She then retaliates with a ritual in which she orders prisoners to say the names of several Gun-Agents to telepathically flatten them from a distance.

Personality of Makima in Chainsaw Man

Makima in Chainsaw Man keeps a calm and decisive demeanor as a Devil Hunter, always acting on her own with little to no resistance from other officials.

Despite being the leader of various Divisions, Makima is willing to put her subordinates on the line in order to fulfill her own goals. Another veteran Devil Hunter named Kishibe even called her out for letting specific events happen so that she could save more people in the process.

She is typically seen as emotionless and extremely manipulative, especially towards Denji. Working off the whole pet dynamic from the first meeting, she keeps Denji on a metaphorical leash with the promise of emotional and sexual intimacy.

Makima appears in the first chapter of the manga, which depicts her first encounter with Denji and the Chainsaw Man.