Hashirama’s cells are putting in work. Could it just be an extra perk from his Mangekyo Sharingan?

The Boruto anime puts the spotlight on beloved franchise character Sasuke Uchiha and his quest to save Naruto from an illness caused by the power of the Sage of Six Paths.

The newest arc gives an in-depth look at the elite ninja’s espionage lifestyle, but fans caught a glaring mistake about Sasuke during his mission in Redaku.

In episode 282, Sasuke infiltrates the Tatar Observatory as an undercover prisoner and fights off a group of thugs in the cafeteria. The newcomer is unfazed by the attacks, easily dodging thrown forks and landing punches with only one arm.

In one scene where the guards enter to stop the fight, Sasuke is seen having two arms for a few seconds.

Fans of the series were quick to point out the continuity error. Twitter user PridefulSin even commented that Sasuke’s arm “somehow grew back” for the latest arc.

Despite the minor error, the rest of the episode shows Sasuke with his left sleeve rolled up, indicating that he no longer has his left arm.

How did Sasuke actually lose his arm? 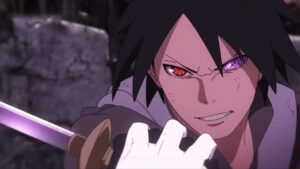 The incident happened in Sasuke’s final battle against Naruto in the Shippuden series. The two lost their arms when they clashed with their iconic moves, Naruto’s Rasengan and Sasuke’s Chidori.

The longtime rivals survived the fight with the help of their teammate Sakura who specializes in medical jutsus.

While Naruto decided to get a prosthetic right arm with the use of Hashirama cells, Sasuke chose not to replace his arm since it’s a reminder of his past wrongdoings.

READ MORE: Emo daddy Sasuke gets his own anime adaptation in Boruto