Version1 effys: ‘When you don’t second guess, you come out on top’ 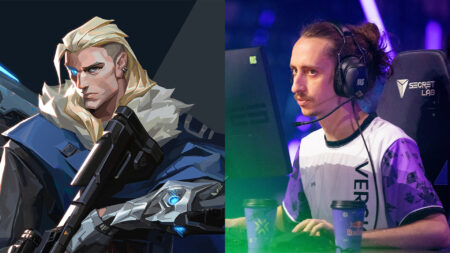 Version1’s Loic “effys” Sauvageau isn’t pulling any punches at the Valorant Champions Tour (VCT) Stage 2 Masters in Reykjavík, Iceland. In an exclusive interview with ONE Esports, Version1 effys discussed why he thinks the North American region has an edge.

North American players have the edge in close rounds

effys explained how Version1 was able to clutch out close rounds on both maps: “This is where we shine, I think in NA especially — [in] these scrappy rounds and these good mid-round calls, because we have experienced IGLs (in-game-leader) like Anthony “vanity” Malaspina.”

On Ascent, Crazy Raccoon almost forced overtime after winning six rounds following the half. On the very last round, Version1 was able to clutch it out after vanity made the call to full-rotate to the A-site after being denied at B-main.

With only 26 seconds left on the clock, Version1 sprinted to the A-site and managed to plant the spike in time. The North American squad then took the site by force and played the post-plant perfectly, making the most of their numbers advantage.

Version1 effys praised vanity for his quick decision making, “He knew exactly what to do in this moment and we trust him 100%. So, as soon as he says something, there is no hesitation. There are no second guesses. That really helps in tense situations. When you don’t second guess, you – more often than not – come out on top.”

“We have a lot of experience in these scrappy situations, like a lot of rounds are like this in NA. So, I think that gives us an edge in these tight rounds over less experienced players,” Version1 effys added.

Two controllers are needed on Icebox

On Icebox, Version1 effys commended Crazy Raccoon’s attacker side. “How they were abusing our aggressive [agent] composition was surprising. An, they found ways to counter our defender side really quickly. In NA, teams usually take a few rounds to adapt. Right at the start of the pistol round, [Crazy Racoon] instantly knew how to abuse us.”

Version1 effys also explained why they don’t play Astra on Icebox. “I’ll be honest, I think Icebox is the map where the meta has changed the least because I don’t think Astra is strong on Icebox. There are a lot of different choke points, and it’s hard to use your orbs efficiently. This is why we don’t use Astra on it. We just don’t feel she’s powerful enough on it.”

Instead, Version1 effys and his teammates prefer to have Viper, because her wall is strong on Icebox. “It’s a very open map and having another controller just doesn’t do the job. You need Viper to block mid, to block B, to block all the choke points. That makes the Viper pretty strong and teams play a lot more post-plant. They’ll go into a site, plant the bomb, then play double mollies with KJ and Viper. Shock darts, Raze’s [Paint Shells]. I think that’s how it shifted when Viper got buffed.”

Version1 is now set to face European powerhouse Team Liquid on Day 2 of the competition. When asked about the ongoing North America versus Europe rivalry, Version1 effys responded that he thinks there isn’t any pressure on their side.

“We’re the underdogs, we’re coming in with a sub. So, there’s not much pressure on us. We’re just going to go in and play our game, play confident,” he explained. “We haven’t really prepared anything special for them. We’re going to keep it simple and adapt to what they’re doing.”

Version1 plays team Liquid on May 26 at 1:30 a.m. GMT+8. Fans can watch the match live on on Valorant’s Twitch and YouTube channels.

READ MORE: Team Liquid ScreaM: ‘No one is good enough to dominate the whole scene’