“When I watch this, I just want to play Viper.” 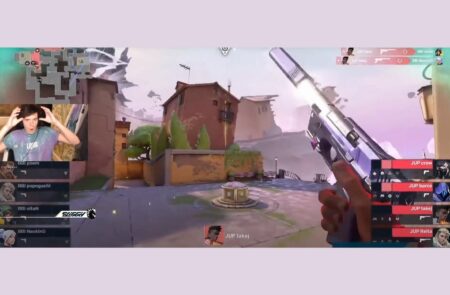 Absolute Jupiter is one of the most dominant teams in Japan, winning First Strike and qualifying for Masters in their region. As the Valorant Masters continues, the team is practically a shoo-in for Champions, with few teams in Japan able to match their level of gameplay.

In this pistol round on Ascent, Absolute Jupiter is on the attacking side. As they move towards B site, they leave Takemori “takej” Shogo (Phoenix) alone to move towards A. Maruoka “crow” Tomoaki on Viper supports their lone teammate by cutting A site with Toxic Screen. takej is able to single-handedly take down all of Blackbird Ignis, even before the rest of Jupiter can even complete their push onto B. Sliggy was mind-blown by this one-man attack, bewildered why people haven’t been talking about it on Reddit or other sites.

Sliggy also praised Koji “Laz” Ushida on Cypher, calling him “a beast”. Laz’s Spycam and Trapwire placements cover the best possible angles to optimize the gathering of information, and he’s able to turn the sentinel agent into a bit of a duelist, even earning that top fragger spot at times.

Sliggy says that he was inspired to play Viper after seeing their match and that Jupiter plays “Viper way better than he does on Ascent.”

READ MORE: Valorant’s latest agent will have you over the moon