Solo is ready to start his coaching journey. 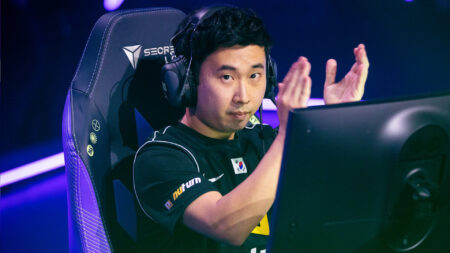 Since becoming a free agent after leaving NUTURN Gaming on November 12, 2021, Solo aims to bring DWG KIA to the forefront of VCT Korea in the upcoming season.

The 33-year-old FPS veteran has been competing professionally since 2009. He started his pro career playing Counter-Strike in Korea.

Solo found most of his success competing in CS 1.6 where he won the World eSports Masters 2010 with WeMade FOX. He then transitioned to playing CS:GO in 2016 under MVP PK until 2019.

He made the switch to Valorant in 2020, having signed with NUTURN Gaming for the duration of Riot Games’ Ignition Series online events and VCT 2021 season. The Korean squad’s most notable run was during VCT Korea Stage 2 where they qualified for Valorant’s first international tournament.

NUTURN Gaming proved Korea had what it takes to compete against the top regions. The team finished third at the VCT Stage 2 Masters Reykjavík behind Fnatic and Sentinels.

Solo decided to retire as a professional player after NUTURN Gaming was knocked out by DAMWON Gaming (DWG KIA) in the VCT APC Last Chance Qualifier and failed to qualify for Valorant Champions 2021.

DAMWON Gaming looks to produce better results in the upcoming season with Solo as its Valorant roster’s new head coach.

The Korean organization came close to qualifying for Masters Berlin after making it to the semifinals of the VCT Korea Stage 3 Challengers Playoffs. DWG KIA were then eliminated from the tournament by F4Q, 1-2.

The team then competed in the APAC Last Chance Qualifier, and was eliminated by Southeast Asian squad Full Sense in the lower bracket final, 0-2.