Yep, this guy can backdash and do flying devil lasers. 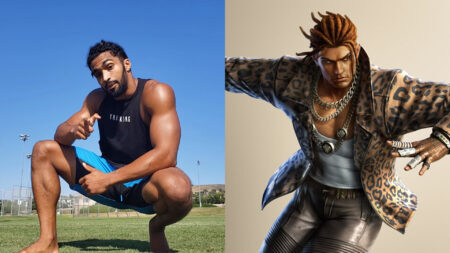 If you’ve ever wondered what Tekken’s most iconic moves would look like in real life, tricker and b-boy Sam “F808Z” Herring is the guy for you.

In this quick compilation, Sam showcases his physical prowess and movement expertise by perfectly recreating moves from a variety of different characters from the game.

Aside from the usual high kicks and sweeps, F808Z gets pretty technical in each character’s staple combos. With some background as a breakdancer, he nailed Eddy Gordo’s trademark windmill with an insane backspin finish and even emulated the subtle differences between the Karate-based moves of Heihachi, Jin, and Kazuya.

From the looks of it, F808Z is a fan of the fighting game franchise, making some really funny references that only Tekken players would know. He mimicked Bryan’s painfully long punch combos and even brought backdashing into reality with his Steve impression.

To cap the compilation off, Sam took off his shirt and jumped into the air to create a meme-worthy version of Devil Jin’s flying laser.

You can check out the full compilation down below.