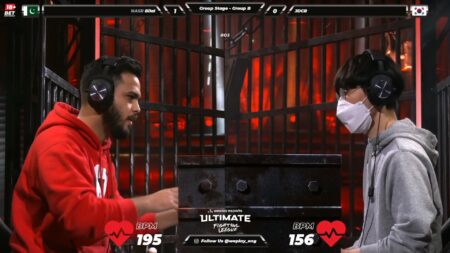 The WePlay Ultimate Fighting League is one of many FGC tournaments that are safely bringing back offline fighting game events.

Aside from having a decked-out arena to play out fights and a shiny championship belt for the best fighter, the FGC league takes it up a notch with an interesting addition to the gameplay: heart rate monitors.

As the players play matches, they are outfitted with heart rate monitors to see if they’re keeping their cool or pumping their blood for more oxygen.

From the looks of it, Tekken 7 seems to be the most heart-thumping fighting game, with Bilal Ilyas almost reaching 200 BPM in his intense match-up with Tekken legend Kim “JDCR” Hyun-jin.

Mortal Kombat 11 is also up there in terms of exploding hearts. In this bloody bout between Arman “ArnKratos” Mkrtchyan and Hamid “MK_Azerbaijan” Mustafayev, the two exchanged fatal blows while keeping a steady heart rate above 160BPM, proving that competitive gaming can be viable as a workout.