Get to know your next challenger! Netflix’s latest anime adaptation Tekken Bloodline tells the story of Jin Kazama and his rise as a formidable fighter.

Putting the spotlight on the third King of the Iron Fist tournament, the first season brings in a few familiar faces from the fighting game to enter the competition alongside Jin.

Check out who all the Tekken characters in Tekken Bloodline are, and in which episode they were first introduced.

Kazuya Mishima is introduced in the first episode as an ominous threat to the world of Tekken. He is the son of Heihachi Mishima and the father of Jin Kazama, and acts as a background character in the first season.

As seen in multiple flashbacks, Kazuya is revealed to have the Devil Gene, a genetic abnormality that grants superhuman strength and demonic powers. Heihachi’s goal in the tournaments was to provoke those who had the Devil Gene to transform and then kill them. Jin, being the son of Kazama, is also a carrier of the Devil Gene.

According to Paul Phoenix, Heihachi killed Kazuya in the final fight of the second Tekken tournament.

First appearing as a teenager, Jin Kazama is the main character of Tekken Bloodline.

As the son of Kazuya Mishima and Jun Kazama, Jin often struggles to find a balance between the two clan-based fighting techniques. While initially taught the defensive Kazama fighting style by his mother Jun, he soon learns about the offensive attacks of the Mishima clan through grandfather Heihachi.

Last appearing in Tekken Tag Tournament 2 (2011), Jun Kazama makes a return in Tekken Bloodline as part of its supporting cast.

The loving mother and karate instructor of Jin, Jun acts as a voice of reason to the teenager and his brash actions. Even as a Kazama-style fighter who is all about defense, she urges her son to learn the hard-hitting martial arts of the Mishima clan.

Just like in the fighting game series, Ancient Ogre is the big bad boss of Tekken Bloodline. While its origins are unknown, a few select characters in the story discovers that you can summon the green giant with an ancient pendant.

Tekken’s sumo wrestler is back, and he’s looking quite dapper.

In the anime, Ganryu is Heihachi’s right-hand bodyguard, and usually stays on the sidelines as Heihachi teaches Jin how to fight. The rikishi has yet to show off his fighting skills, so diehard fans will have to wait for season two to see him in action.

Tough love is all you need, according to this grumpy grandpa.

As Jin’s last living family member, Heihachi Mishima comes off as a cold-hearted, yet wise mentor to the teenage fighter, but don’t let his Electric Wind God Fist fool you. The Mishima Zaibatsu leader will always put his interests before yours.

A montage of missing fighters

The excellent Lee Chaolan can be seen as the fourth person on the list. Canonically, Lee is the adopted son of Heihachi Mishima, but things turned awry between the two when Lee sided with Kazuya during the second Tekken tournament.

Initially introduced as Jin Kazama’s biggest rival, Hwoarang gets quite chummy with Jin when they meet again at the King of the Iron Fist tournament.

Xiaoyu usually keeps her distance from her crush in the video game, but the show further fleshes out their dynamic as a caring friendship. Instead of dreaming about locking eyes under the summer sun, Xiaoyu actually converses with Jin about family and self-esteem issues.

A handful of participating Tekken fighters 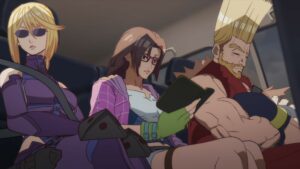 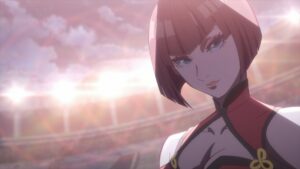 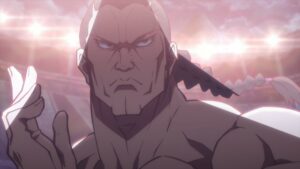 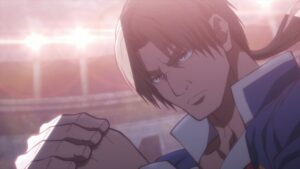 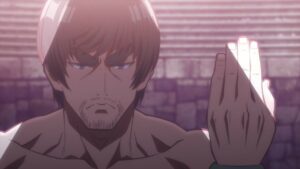 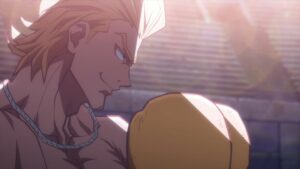 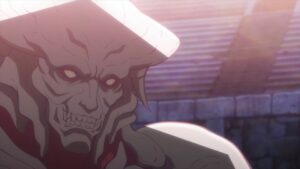 Of course, it’s not a tournament arc without a fully stacked bracket.

Episode three introduces 13 more characters as part of the third Tekken tournament. You can spot classic characters like Yoshimitsu, Marshall Law and newcomer Leroy Smith, who joined the Tekken roster in 2019.

Julia Chang and Paul Phoenix take a bigger role in the story as Jin’s confidants about Heihachi’s actual plans with the tournament.

Wait, there are two Kings?

Tekken Bloodline plucked at the heartstrings of OG fans by telling the tale of King I. For those who don’t know, the original King was a luchador from Mexico who fought in tournaments to support orphans around the world. He eventually met his demise after getting attacked by Ancient Ogre.

Fast forward to the third Tekken tournament, an orphan who was under King’s care took the mantle of the masked wrestler, continuing his iconic legacy of insane wrestling moves and a secret identity.

Throughout the years, the Tekken franchise has released a handful of oddball fighters, and Dr. Bosconovitch just so happens to be one of them.

In the anime, the scientist comes in as part of Heihachi’s research team, tasked to imprison the Ancient Ogre and study its supernatural powers.

In the final episode, Ancient Ogre transforms into an even bigger monstrosity named True Ogre.

The mythological creature now has horns, giant wings, and a living snake as its right arm. While its main power in Tekken 3 was to absorb the fighting styles of its victims, the series only shows True Ogre attacking with its monster qualities. No need to worry about snake edges this time.

Once Jin Kazama finds out the truth behind Heihachi’s plans, he transforms into the bloodthirsty Devil Jin.

In Tekken 5, Devil Jin was introduced as a separate playable fighter from Jin Kazama. While Jin stays true to his roots of Kazama parries and fakeouts, Devil Jin utilizes the pure offensive style of the Mishimas with moves like the EWGF and the hellsweep. He also has the ability to shoot lasers and fly.