How did Angel of Death Vega not make it?! 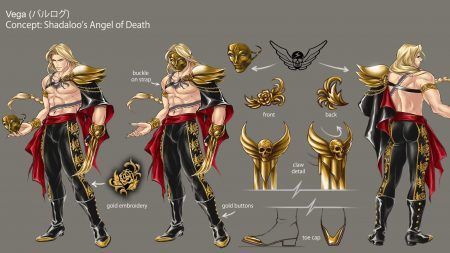 Capcom is presently on the last stage of its SFV Costume Design Contest, which began in May of this year and allowed fans to create their own costumes for any of the existing 40 characters featured in Champion Edition. The event also marks the developer’s 25th anniversary as a leading company in the gaming industry.

In a series of tweets, Capcom narrowed the numerous entries down to the final 12, each design earning a place through a combination of staff selection and community voting. Fans may vote by ‘liking’ the tweets which contain the designs they prefer. “For a ‘like’ to count as a vote, the ‘like’ must be placed on [the original] tweet,” the organizers reminded, “A ‘like’ on a ‘retweet with comment’ will not count.”

Here are the top three costumes with the most likes, which SFV fans have gravitated towards:

With over 11,000 likes, this entry features villain Juri decked out in a sukeban (or ‘delinquent girl’) outfit, complete with a long biker jacket, baggy pants; and wrappings on her chest, hands, and feet. Perhaps in reference to her ties with Shadaloo’s weapons division, S.I.N., this Juri looks ready to command her henchmen and rule the streets.

This design, boasting nearly 14,000 likes, depicts Sakura in a summer festival outfit, with taiko drumsticks strapped to her back, a cute octopus purse — which the artist refers to as ‘Takorin’ — to hold her money, and optional Megaman masks. The latter was added in reference to the popular Japanese festival and street snack, takoyaki.

With a whopping 16,000 likes, this version of Juri sports M. Bison’s iconic hat and Seth’s cloak, as if she’s defeated them both in battle. Accompanied by her eyepatch, it’s an intimidating sight. The artist also included various color options, just like in the game.

Capcom will be immortalizing the two entries with the most votes by adding them to this final DLC expansion. In the meantime, fans can continue getting those ‘likes’ in until August 31.

But these aren’t the only designs that caused a stir. Through the contest’s #SFVCostumeDesignContest hashtag, fans can check out all the other entries, including ones that weren’t even selected for fan voting.

This Angel of Death Vega by @tixie_lix in particular is simply amazing: