One more character has yet to be revealed. 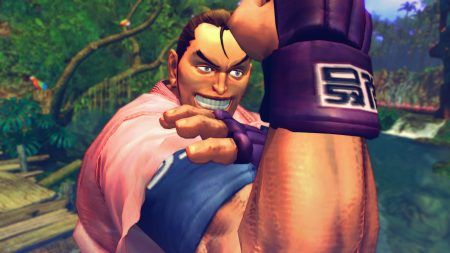 Dan Hibiki is a fan favorite character because of his overconfident personality. And, in the Summer Update, Nakayama showed in-game footage where Dan’s Taunt ability was used as a unique game mechanic for the character

AEW pro wrestler Kenny Omega then revealed Rose as the second addition to the SFV:CE roster. The Soul Power master is still in her development stage, but Nakayama mentioned that she will eventually be getting her own stage.

The two Capcom representatives continued their presentation, announcing that Oro would be the third character to join the SFV:CE roster. Oro is a Street Fighter III: 3rd Strike character who had great mobility and air juggle combos.

The final character reveal was a bit of a shock since it was one that had appeared in the Rival Schools series, Akira Kazama. Nakayama explained, “Akira was acquaintances with Sakura, so she already had a connection to Street Fighter.” Akira will notably also have her own stage in SFV: CE.

Nakayama and Matsumoto stated that there is still one more character announcement that will be revealed at a later date. They then showed a roadmap that illustrated what fans can expect now that Street Fighter V is coming to a close.

SFL Pro US Season 3 is set to return this October. The competition will run for 16 weeks. Meanwhile, SFL Pro Japan Season 3 will start in Fall.