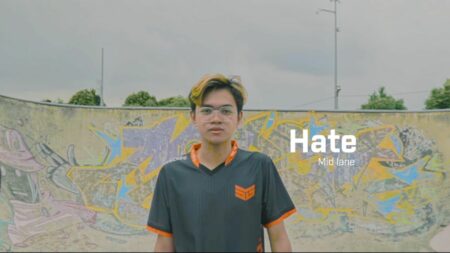 Hate becomes the first Filipino import to play for a Malaysian team and the second confirmed MPL PH player to play overseas this season after Kairi “Kairi” Rayosdelsol with ONIC Esports.

Hate will play for Team SMG at MPL MY Season 10

The organization released a video of its official lineup for the 10th season, which includes stars Lu Khai “Sasa” Bean and captain Aeliff Adam “Smooth” Md Ariff. They will be under the guidance of veteran head coach James “Jamesss” Chen.

The midlaner will also be reverting his name from Hatred to Hate, his former in-game name when he was with Execration in seasons 5 and 6.

After joining ONIC in season 7, he got his big break after placing second at MPL PH Season 8, securing a slot at the M3 World Championship, where they finished second as well.

The yellow hedgehog squad weren’t as successful in season 9 after they finished fourth and failed to get an MSC 2022 slot. The organization then released eight of its nine players, including the 19-year-old midlaner.

After winning MPL MY Season 8, SMG failed to defend its crown in the ninth season after losing to eventual champion Todak in the upper bracket semifinal and Team Caracal in the lower bracket quarterfinal.