A costly misplay resulted in Bigetron Alpha getting swept by RRQ this week. 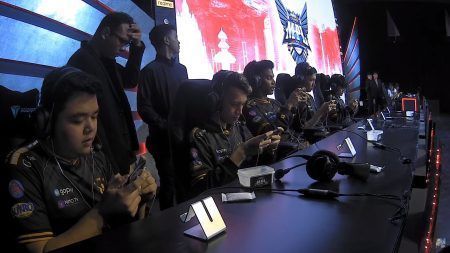 Indonesia’s Mobile Legends Pro League Season 5 closed out its first month with a bang as the two best teams in the league faced off.

Match of the Week: RRQ Hoshi vs Bigetron Alpha

From the start of game one, RRQ Hoshi dominated the map, looking for every kill opportunity possible. By the tenth minute, Lemon already had seven kills and no deaths as RRQ’s mid-lane nuker.

With an 11K gold advantage and the Lord on their side, RRQ sieged BTR’s base for a final wipe-out and win.

Bigetron Alpha found their footing in the middle of game two and the tightly contested down saw both teams even on kills and gold.

However, RRQ took the advantage when a miscalculated clash sent BTR on a wild goose chase around the map.

Despite losing two members, RRQ took advantage of BTR’s misplay, seizing the opportunity to attack their base as the trio of Calvin “Vyn”, Joshua “LJ” Darmansyah, and M “Lemon” Ikhsan took down BTR’s base inhibitor for a well-earned sweep.

Bigetron Alpha’s sidelane player was a force to be reckoned with during their match against EVOS Legends.

Despite not playing his preferred main of Granger, Branz still dominated the first game with Wanwan, with a perfect 7/0/4 KDA.

In this highlight play, BTR initiates one last push in the top lane, only to be greeted by EVOS rookie Farhan “Larajie” Mahri. Although Larajie got some damage on Hengky “Kyy” Gunawan, Branz instantly deletes the player from the fight.

With Akbar “Bravo” Nirda taking down Muhammad “Wannn” Ridwan, Branz went in for the deep base dive.

With his Crossbow of Tang activated, Branz shoots down Fahmi “Rexxy” Alamsyah and Ihsan “Luminaire” Kusudana, giving himself an easy triple-kill.

With only one EVOS member alive, BTR destroyed the defenseless base inhibitor in a matter of seconds.

Aura takes fourth place (4-3) due to having a lower game aggregate than EVOS.

Onic sits in fifth place (3-4) while Alter Ego trails right behind with the same standing.

Genflix Aerowolf and Geek Fam end the leaderboard with a 1-6 standing.