Sticking to your enemies has never been this fun. 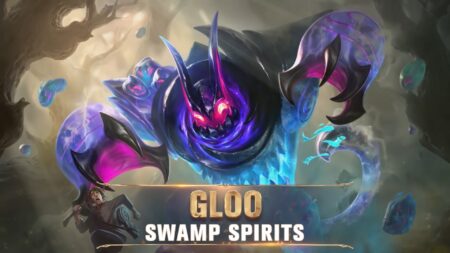 The last time a new beefy hero was released was with the introduction of Barats. Since then, it’s been marksmen, assassins, fighters, and mages.

Newest hero Gloo, the Swamp Spirit, specializes in regeneration and crowd control. According to Moonton’s assessment, while he’s very durable, he’s not going to be easy to master.

Enemies gain a stack of sticky and are slowed each time they’re hit by Gloo’s skills, up to a maximum of five stacks. Each stack reduces the enemy hero’s damage dealt to Gloo by a small amount.

Gloo reaches out and slams the ground, dealing damage to enemies hit. At the same time, he leaves a Goo at the end of the skill’s range.

After three seconds, the Goo will explode, inflicting damage and immobilizing enemies within its radius. Gloo can detonate the Goo immediately by walking into it.

Gloo stretches forward in a straight line to deal magic damage to enemies in his path, immobilizing them.

If this skill hits a Goo, Gloo will charge over to it, and drag all enemies in the path along with him.

Gloo splits apart, in which all Goos move together with increased movement speed. He also recovers HP and damage enemy targets he walks into simultaneously.

When Grab, Grab is cast, Gloo attaches himself to a target enemy hero that has full Sticky stacks and instantly regains a large amount of HP. During this period, his skills cooldown is halved, and he can cast them at will.

A portion of damage he receives is transmitted to his host, while he regains a portion of his HP.