From the boxing ring to the Land of Dawn. 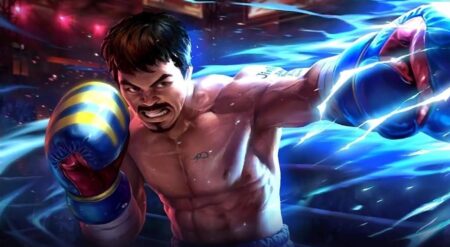 After months of teasers and speculations, Mobile Legends: Bang Bang has finally revealed the newest Manny Pacquiao skin for Paquito.

This Southeast Asian region-exclusive skin is a tribute to the pound-for-pound boxer, complete with tattoos and his signature beard that we all know and love.

In this Manny Pacquiao skin, Paquito wears traditional boxing shorts with the words Pacman, his nickname, seen in the upper front area. Pacquiao also wears boxing gloves with a lightning streak design, and boots with the letter “P” engraved in the tongue.

His abilities are what makes this epic skin a must-buy. His Heavy Left Punch, Jab, and Knockout Strike now emit a thunderous effect that looks visually stunning.

His shield during Champ Stance has also been visually upgraded to match the aesthetics of the skin.

Manny Pacquiao will be joining us in the Land of Dawn this April 16.