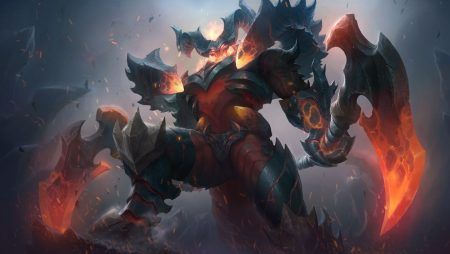 Before the final day of playoffs, he already had a 80% win rate on this hero, and is clearly very comfortable playing this fighter. He delivered on Thamuz against Orange Esports Reborn in the lower bracket final, and again in the grand final against Geek Fam.

Here are five tips from the man himself to rise up on Thamuz:

For Battle Spells, I recommend Vengeance, Flicker, and Revitalize depending on the situation. When up against a lot of magic damage dealers, it’s best to go Flicker.

If I’m playing against a lot of physical damage heroes, it’s best to go Vengeance or Revitalize. If the enemy heroes do not have much burst, use Revitalize for the early sustain.

2. Build Bloodlust Axe and Wings of the Apocalypse Queen for core items

As the game progresses, build into Bloodlust Axe and Wings of the Apocalypse Queen for core items.

The spell vamp from Bloodlust Axe is very effective on Thamuz, as most of his skills are AoE, while Wings of Apocalypse Queen helps him to sustain during team fights.

However, if there are too many mages, I don’t suggest buying Bloodlust Axe as most players will buy Necklace of Durance when they are playing against Thamuz.

Instead, buy Wings of Apocalypse Queen early, and choose items that give you more sustain, especially if your team needs you to be their front line. For example, you can buy Magic Blade and Athena’s Shield too.

If the team is falling behind in-game, I suggest rushing Immortality in addition to Wings of Apocalypse Queen.

Remember to put a point in Molten Scythes first. It helps you to clear the waves and harass opponents.

Be sure to position Molten Scythes behind the enemy hero so that so when you jump using Chasm Trample, you are able to pull the wheel towards you and pull enemies in too.

4. Roam, soak up damage, and combo with Atlas

In the early game, pressure your lane hard, then roam. If you are laning against a weaker hero, try to cut off minions before they reach the lane, so that you put pressure on the enemy’s buff.

During team fights, stand in front and soak as much damage to give your core players room to carry.

Where possible, combo with your pal, Atlas. He has tons of AoE damage, and allows Thamuz to shine in clumped up fights. Atlas’ ultimate, Fatal Links, helps with that.

Watch out if the enemy has a Valir. Buy more magic resist and try to dodge his spells so that he can’t get a reset.

5. Focus on creating opportunities in the early to mid game

Thamuz does not scale well into the late game, so do everything you can from early to mid game.

In lane, trade HP with your opponent, keep up the pressure, and zone so that you limit their experience. You need to ensure you can keep your opposing laner in lane so they won’t be able to roam.

By doing so, you can roam instead. Open the map for your team and get as much info as possible.

Thamuz is a hero who is truly able to make the early game go more smoothly, so it’s best to team up with a friend who plays mid lane. You’ll be able to communicate ganks and work better together. In ranked, I suggest teaming up as a trio at least, for Thamuz cannot solo carry.

Keep up with Sana and his team, Resurgence, by following them on Facebook.