TheShy: ‘I don’t get LPL teams, I don’t get what they’re trying to do’

He wasn’t shy about expressing his opinions. 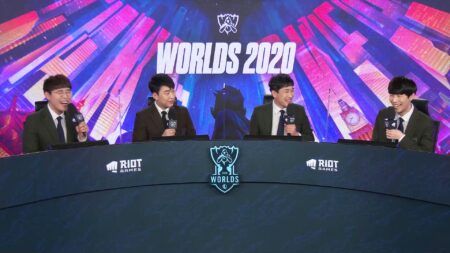 The League of Legends Worlds Korean broadcast has been inviting current and former pro-players to be guest commentators during the live games. In the most recent semifinals match between Suning and Top Esports, Invictus Gaming’s top laner Kang “TheShy” Seung-lok went on the desk.

In the off season, he has returned to his home country in South Korea. Having competed in the LPL for the last five years and as a former teammate of Yu “JackeyLove” Wen-Bo, he was the perfect choice to speak about the LPL vs LPL semifinals series between Top Esports and Suning.

TheShy is known for being straightforward, and he spoke his mind on the livestream. In game one, when TES top laner Bai “369” Jia-Hao was playing from behind on Jayce after three deaths, TheShy was quick to comment on his build.

Considering that TheShy holds the record for the most deaths in the 2020 LPL Spring Split and zero wins on this champion, his advice seems to come from personal experience.

He did not hold back his opinions in game two either. When JackeyLove Arcane Shifted over the wall and Flashed to reengage 1v4 without his team to back him up, TheShy wasn’t amused. “Well, he does it often. I don’t have a huge thought [about it],” he said.

The funniest comment of the evening was when TheShy remarked how he didn’t understand the way LPL teams played. The casters were quick to comment on this pot calling the kettle black situation, in which he attempted to justify himself.

Who can blame him, really? None of us really understand the mind blowing ways LPL teams play League of Legends either.

Most recently, TheShy set up his own independent YouTube channel and Instagram account now that he’s back in Korea streaming more regularly. He also revealed that he wasn’t sure on what his next move will be for 2021, as his contract with Invictus Gaming expires this year.

TheShy added, “If I continue to be a professional player I think I’ll stay in China since I want to play alongside Rookie. If [Rookie’s] not there, I think I’ll just stop, or take a break instead. If possible, I would like to play with Rookie, because next year could be his last.”

READ MORE: 4 years ago, coach kkOma made a mistake at Worlds that resulted in one of the greatest games of all time