4 years ago, coach kkOma made a mistake at Worlds that resulted in one of the greatest games of all time

“I won’t forget this match until I die,” said kkOma. 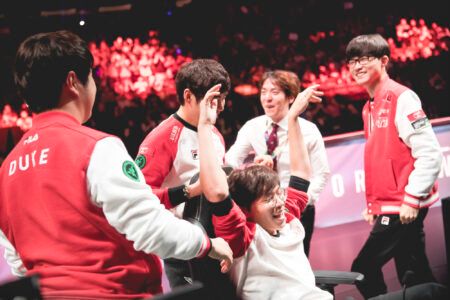 “SKT bounce back 1-2 to get a 3-2 win over ROX to secure their spot in the Finals once again.”

“The most incredible, highest standard of League of Legends was played today. Bengi carried his team on his shoulders as The Jungle. Smartest, most brilliant jungler ever. When he has his S game on, his game management is unparalleled,” I had written four years ago.

Obviously, I was an SKT fan. I supported them from 2015 to 2017 in a unique way — I watched every single one of their games and analyzed them on my blog.

Even if you’re not an SKT fan, I’m sure you’ve seen many highlight plays from both SK Telecom T1 and ROX Tigers from this match, as it is one of the best series ever in LoL esports history.

2016 was supposed to be the year for the ROX Tigers. They were coming in hot after finishing first in LCK Spring and Summer regular seasons, and winning the Summer championship. Song “Smeb” Kyung-ho, Kim “PraY” Jong-in, Han “Peanut” Wang-ho, and Kang “GorillA” Beom-hyun had developed an aggressive playstyle in-game, and youthful camaraderie offscreen.

The sounds of screaming fan girls followed them around. As teammates and as friends, they liked to sing, joke, and laugh, and were always bursting with energy. At ROX, these players were in their prime.

On the other side of the stage, SKT were defending World champions. After a robust 2015 with top laner Jang “MaRin” Gyeong-hwan, they chose Lee “Duke” Ho-seong to fill big shoes. In the jungle, Bae “bengi” Seong-woong gradually passed his baton over to a more carry oriented jungler, Kang “Blank” Sun-gu, who started over him two thirds of the time.

With two big roster changes, SKT were vying for their third championship and make history by being the first team to win back-to-back titles.

Thankfully the Worlds 2016 meta was fun for viewers too. It was a control mid meta, with Syndra, Viktor, Ryze and Cassiopeia as top picks. After banning Nidalee, the top tier jungler at that time, teams played Olaf, Lee Sin, Elise, and Rek’Sai. This meant that mid-jungle synergy determined much of the early game.

Zyra was top tier that patch. She did so much damage that she could be played as an AP support by rushing Liandry’s Torment as a first item. Paired with Jhin, they had high burst damage, crowd control, and lane dominance.

During the semifinals, ROX Tigers were one game down. Determined to make their presence felt in the series, they surprised everyone in game two — and I mean everyone — by last picking Miss Fortune.

You can tell from the audio that all three casters were trying to figure out why ROX had picked Miss Fortune when Ashe was already locked in.

Turns out, ROX figured out an ingenious way to counter Zyra — by slowing her with Make It Rain and using her plants against her with Double Up. MF’s innate high movement speed also helps with dodging skill shots. Plus, the moment Ashe hits an Enchanted Crystal Arrow onto a squishy target, all MF needs to do is press R for a painful combo.

Game two was also the game where PraY’s career highlight happened. 32-minutes in, he shot a perfectly placed cross-map Enchanted Crystal Arrow to stop Duke’s Ekko from teleporting back to defend his base.

Game four determined if SKT would stay in the series, or bow out of Worlds. Because it was an absolutely crucial game, head coach Kim “kkOma” Jeong-gyun subbed out Blank for bengi, the “right hand of God”.

During the draft phase, KkOma also forgot to ban Nidalee.

Reworked that year and buffed on patch 6.15, Nidalee was not just S-tier. She was Peanut’s signature champion and SKT made sure to ban her in the first three games of the series.

On top of that, bengi was never known to be a carry jungler. He was a facilitator. On Elise, Rek’Sai, Jarvan, and Gragas, he played for his laners and manipulated the jungle to support them.

Prior to this, bengi had never played a professional game on Nidalee.

In the one game to determine SKT’s fate, in the biggest game of his life on the Worlds stage, he had to.

With the weight of the world on his shoulders, bengi played Nidalee — and he did it his way.

Four minutes in, we see two trinket wards in ROX’s jungle. Bengi had full information on where Peanut’s Olaf was and what he was doing. First the Gromp, then the Wolves. As bengi waited in the fog of war, shoutcaster Mitch “Krepo” Voorspoels analyzed, “He’s not going for a play on mid lane, he’s going to wait for Peanut, he’s going to challenge him on the Wolves.”

What did bengi do? He played for mid lane.

He worked with God, Lee “Faker” Sang-hyeok, for a perfectly executed first blood. Setting the pace from the early game, bengi didn’t power clear his jungle or counter-jungle on Nidalee. Instead, he used her clear timings to gain vision advantages, allowing him to assert pressure on his lanes. And so with the rest of SKT, the series was evened out at 2-2.

In the last deciding game, both teams were neck and neck. Even though ROX managed to secure the first Baron, SKT claimed four lives in return which gave them a tempo advantage and a 2,000 gold lead.

The Tigers weren’t done though. They saw an opportunity to gank Faker in the top lane, and together, four of them took it. With immaculate dodging, Ghost, and a clutch Shockwave, Faker escaped the 1v4 as the Madison Square Garden crowd roared loudly in the background.

When the next Baron spawned, SKT put their duo and top laner mid lane to keep a push going. Out of ROX’s vision, bengi’s Lee Sin and Faker’s Orianna sneakily rushed the Baron. Combined with the Elder Dragon buff, SKT went on to win the series, qualify for the finals, and win the 2016 World Championship.

kkOma reflected on this series last year in The Longshot, echoing the sentiment of many LoL fans, “It’s one of the greatest best-of-five matches ever. I won’t forget this match until I die.”