JackeyLove shows no mercy with this calculated tower dive

Is JackeyLove the best AD carry at Worlds 2020? 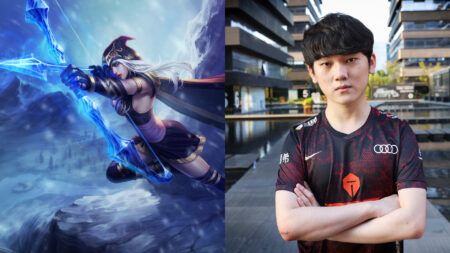 In the second match of the day in Worlds 2020 Group D, Top Esports and Unicorns of Love faced off against each other in the second round robin. By mid game, Yu “JackeyLove” Wen-Bo had two kills and was vying for more.

Up by more than 5,000 gold, Top Esports had a solid lead. 13 minutes into the game, support Liang “yuyanjia” Jia-Yuan on Lulu found himself mispositioned beyond enemy lines. In a 3v2 situation, he used Wild Growth on himself and had to flash to get out.

As backup arrived, JackeyLove reengaged Unicorns of Love with an Enchanted Cyrstal Arrow. At that moment, Hung “Karsa” Hao-Hsuan on Graves followed up with massive burst damage for three kills.

Even though UoL’s mid laner Lev “Nomanz” Yakshin completed his teleport to bot lane, his team was not able to withstand the onslaught. For a while, things calmed down, and as Lucian, he was safe under the tower.

However, after landing a Volley, JakceyLove committed to the exchange. He utilized Ranger’s Focus and Blade of the Ruined King’s active. With some help from Lulu, he also gained a shield and in the last second, flashed out of turret range for a stylish kill.

Continually auto-attacking minions, he gained health back through lifesteal, barely surviving with a sliver of HP. Top Esports went on to win the game and top Group D.

Is JackeyLove the best AD carry at Worlds 2020? Catch Top Esports live in action against Fnatic in their quarterfinal series on 17 October at 6 p.m. (GMT+8).