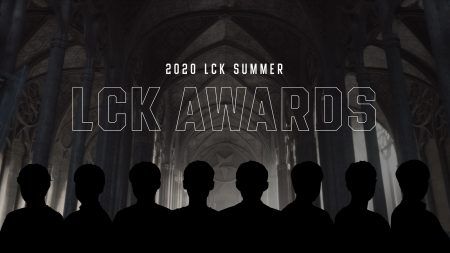 With the 2020 LCK Summer Split regular season concluded, the LCK has revealed the final results of the All-LCK ballot that showcases the league’s top-rated players and staff. 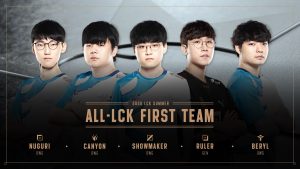 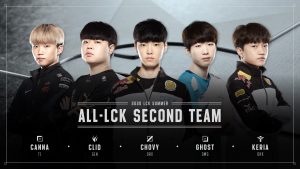 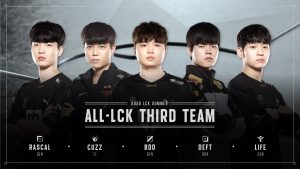 DAMWON Gaming enters as a triumphant force in the All-LCK Team rosters. Most of the regular line-up such as Heo “ShowMaker” Su and Jang “Nuguri” Ha-gwon have made it to the First team while their bot-laner Jang “Ghost” Yong-jun is the team’s sole representative in the Second team.

Aside from their individual efforts and skills, the team was a silent superteam throughout the season. While all eyes were on the likes of DRX, Gen.G, and T1, DAMWON easily snuck into first place with an incredible season with a 16-2 record.

Gen.G’s squad is scattered throughout the three teams, with Park “Ruler” Jae-hyuk and Kim “Clid” Tae-min taking spots in the First and Second team respectively while the rest of Gen.G complete the Third team. Though Ruler broke DWG’s chances of having their whole line-up regarded as a top team, Ruler led the league in kills (209) and DPM (641), making him the best ADC of the split.

T1 and DRX still stay strong with some team members making it in the Second and Third teams. Jeong “Chovy” Ji-hoon comes as a close runner-up to ShowMaker with his diverse champion-pool and his impressive counter-plays in the mid-lane.

Despite still being a rookie, Kim “Canna” Chang-dong was a fan-favorite pick in the top lane. While T1 is heading through rocky waters with an early playoff knockout, Canna comes as a driving force in their ability to dominate the laning phase. 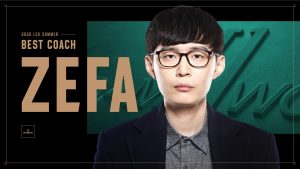 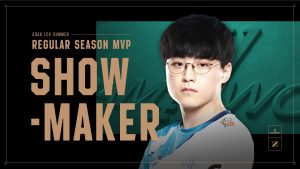 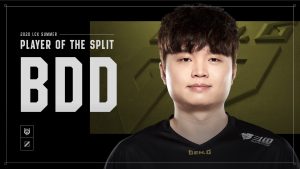 As for individual awards, DAMWON racked up some worthy awards to cap off one of their best seasons in the LCK. ShowMaker brought home the Young Player award (given to the best U19 player with more than 18 matches) with 167 points and Regular Season MVP award with 163 points while DWG coach Lee “Zefa” Jae-min earned the Best Coach award with 167 points.

In terms of stats throughout the season, Gen.G’s Gwak “Bdd” Bo-seong earned the Player Of The Split award for his consistent game-changing playstyle. The Gen.G mid-laner earned 1,300 POG points, beating out the likes of ShowMaker (1,100 points) and Canna (1,000 points).

For more information, you can check out the official LCK announcement.

The 2020 LCK Summer Split Final will be a best-of-five between DRX and DAMWON Gaming on September 5.