Mystic and the Freecs will fight Gen.G in the next round. 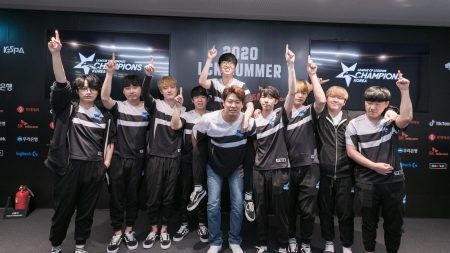 The 2020 LCK Summer Playoffs have just begun and its wild card round showcased one of the biggest upsets in LCK history. Underdogs Afreeca Freecs brought their all against the reigning champs of T1 and surprisingly thwarted the superteam with some intelligent moves on the Rift.

Game one featuring a stunning river counter-play by Afreeca Freecs. While Nam “Ben” Dong-hyun’s Nautilus soaked up the damage of the approaching Culling by Park “Teddy” Jin-seong’s Lucian, Jin “Mystic” Seong-jun’s Miss Fortune stopped T1 in their tracks with a sweeping Bullet Time.

Now low on health, T1 tried to retreat back to the mid-lane, but Lee “Dread” Jin-hyeok’s Graves and Kim “Kiin” Gi-in’s Akali chased down the remaining members for a game-changing ace.

Afreeca Freecs pulled another fast engage in the mid-lane, but this time, Kiin’s Akali dived into the back-line to isolate T1’s main damage-dealers. Shrouded in smoke, Kiin’s Akali rushed in for the double-kill on Moon “Cuzz” Woo-chan’s Olaf and Lee “Effort” Sang-ho’s Leona, also ushering the rest of AF to continue the fight.

With Mystic claiming a double-kill on the rest of T1, the Freecs went straight down the mid-lane to claim the first Nexus and put themselves into match-point.

After securing their first Infernal Drake, Cuzz’s Volibear was stuck inside the Dragon pit with the Freecs coming through from their jungle. Luckily enough, Faker’s TF was able to stun Ben’s Nautilus while Teddy’s Kalista and Effort’s Gragas eliminated the support tank.

With T1’s back-line easily kiting the flanking group, Kim “Canna” Chang-dong’s Jayce entered as the clean-up crew and claimed a double-kill over AF.

Adding a few more scrappy skirmishes and destroyed inhibitors to their side, T1 boasted a significant 12K gold lead. By the 25th minute, T1 dove hard on the final bot turret and Cuzz’s Volibear instantly deleted Mystic’s Aphelios. With the main damage-dealer deep in his death timer, T1 took their picks to complete the ace and marched into the defenseless Nexus to tie out the game-score.

In one clash in the mid-lane, Ben’s Alistar did some impressive tanking and healing throughout the barrage of spells coming from T1. With Ben’s health on the low side, Spirit’s Volibear stepped up as the crowd-controlling front-line of the Freecs, giving the poking back-line free reign over the remaining T1 members.

Though Cuzz’s Karthus took out Ben’s Alistar, Afreeca Freecs came out with 3-1 conversion and also secured both an Infernal Drake and a Baron buff.

Now rocking the Baron buff and super-minions in the mid-lane, AF had full control of the next big move. Not wasting any time, Mystic and the boys opted for a full tower-dive in the top-lane.

While Ben acted as the impenetrable front-line for the tower-dive, the rest of AF focused on structures and secured their second inhibitor to keep the minion pressure up.

Even with Fly’s Zoe and Ben’s Alistar going down from T1’s focused fire, the two ADC’s along with Spirit’s Volibear easily nuked the remaining defenders and had enough creeps to take out the final Nexus of the series.

With the series win, Afreeca Freecs will go on to the next round and will face Gen.G on August 28. As for T1’s remaining postseason, Faker and the boys will be qualifying into the regional finals and will get a chance to take the third LCK seed into Worlds 2020.

READ MORE: 2020 LCK Summer Playoffs: Everything you need to know