The team has also booked their ticket to Worlds. 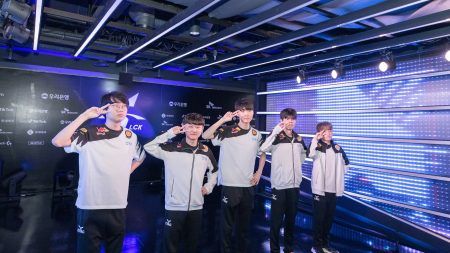 The LCK Summer Playoffs continued yesterday with an intense match between DRX and Gen.G.

While Gwak “Bdd” Bo-seong and Gen.G were favored going into the match, DRX managed to defy expectations and triumphed over the veterans with a hard-fought 3-2 victory.

DRX started off the series on a good note. After singling out Kim “Life” Jeong-min’s Nautilus in an over-extension, Jeong “Chovy” Ji-hoon headed straight for the Baron.

With Gen.G attempting to steal the epic monster, Ryu “Keria” Min-seok’s Thresh landed a hook on Kim “Rascal” Kwang-hee’s Volibear as Chovy’s Lucian entered into range through his lantern and took his own double-kill. After Kim “Deft” Hyuk-kyu’s Ashe solo-killed Park “Ruler” Jae-hyuk’s Senna, DRX rallied back for the Baron capture.

After a few trials to break down Gen.G defenses, DRX found the perfect opening to close out the game. With their opponent’s late arrival to the Baron, the buffed DRX players immediately pounced on the scouting Gen.G team and took out Ruler’s Senna, bringing the game to a 3v5 advantage.

DRX made their way through the mid-lane to aim down the final Nexus turrets. Though the remaining defenders were positioned under the towers, Choi “Doran” Hyeon-joon’s Ornn teleported in to give some well-needed crowd control. As Doran’s Ornn rammed through Bdd’s Twisted Fate, Chovy’s Lucian and Hong “Pyosik” Chang-hyeon’s Lillia dealt the final blows to the Nexus.

Gen.G kept their composure heading into game two, doing their best to commit to easy trades and map objectives. Kim “Clid” Tae-min’s Graves first claimed the Rift Herald and then assisted in the team-wide ambush with a double-kill. The rest of Gen.G chased after two more DRX members around the mid-lane to further widen the economic gap.

Clid’s Graves initiated another great engage at the dragon pit. After Clid stole the Infernal Drake, Gen.G’s other players rushed in through the river to complete the ace over the DRX squad.

By the 24-minute mark, Gen.G was miles ahead of DRX, sporting Baron and Ocean Soul and earning a massive 15K gold lead. Clid’s Graves became the relentless front-liner as the Gen.G crew marched their way to the Nexus to tie up the scoreboard.

Gen.G entered the third game with an incredible spark in their offense. Already picking up some scrappy kills in the beginning, Gen.G pushed their luck with a team-wide punish in the bot-lane. With three of Gen.G retreating, Clid’s Hecarim went straight into the trio with his fearing Onslaught of Shadows, giving enough time for everyone else to claim the three kills.

As for the other two members, Bdd’s TF quickly teleported to Keria’s Braum and Deft’s Senna and threw some gold card stuns to secure the ace.

With such domination, Gen.G ended game three with a three-way split push to destroy all the inhibitors. Doran’s Kennen tried to initiate with his Slicing Maelstrom, but it unfortunately whiffed and left him open for a kill.

Now taking the 4v5 advantage, Gen.G quickly overpowered DRX with a flurry of ultimates and added one more game to their side.

With their backs against the wall, DRX went full-throttle when it came to their engagements. While Gen.G stuck to their usual control of map objectives, DRX did their best to disrupt their ambushes and flanks.

Despite having half of Gen.G flank the waiting DRX members outside the Baron pit, they easily pinched the trio with Deft’s Kalista and Pyosik’s Graves shooting down two of them.

With Chovy’s Ekko finessing the remaining Gen.G members, Doran’s Shen caught up to Ruler’s Ashe and taunted him to claim the third kill.

DRX were now one step ahead of Gen.G in all efforts. Even with Ruler’s Ashe sending out a Hawkshot for Baron vision, DRX quickly backed off in time to thwart the ambush.

Though Clid’s Hecarim popped his ultimate to stop the initial charge, Chovy’s Ekko ulted into the back-line and re-entered the fight to grab a triple-kill.

After grabbing the Elder Dragon buff, DRX sieged Gen.G’s base to end the game with a bang. Clid’s Hecarim did a hail-mary Onslaught behind the back-line, but it barely made a dent on DRX’s carries. With nothing left to do, the remaining Gen.G members stood under the fountain as DRX claimed their second win.

With the scoreboard now tied up, both teams were working to get the quick advantage through the drakes. Clid’s Hecarim used Onslaught on Doran to steal the Ocean drake, but DRX continued the fight to turn things around.

Pyosik’s Lillia landed the perfect Lilting Lullaby on Gen.G’s back-line, giving Deft’s Senna the perfect opportunity to combo it with a Dawning Shadow. With health bars now on critical, Chovy’s Sylas chased down the final kill on Ruler’s Kalista and immediately went for the Baron.

Gen.G tried to get ahead in extra damage with Ocean Soul and the Baron, but DRX immediately caught wind of their presence in the Baron pit. Though Ruler’s Kalista finally claimed the Baron, Gen.G was already surrounded in the river and had no other option but to fight.

With Doran’s Renekton slicing and dicing his way into the fray, this gave Chovy’s Sylas the room to lay down some deadly damage to earn a triple-kill while the rest of DRX kept attacking for the ace.

After the unbelievable ace, DRX razed through the top-lane while Gen.G was still deep into their death timers. Clid’s Hecarim and Life’s Gragas respawned to tank some damage, but the entire DRX squad crowded the Nexus for the third and final game win.

With the series win, DRX will move onto the LCK Summer Playoff finals against DAMWON Gaming on September 5. The team will also automatically qualify as one of LCK’s representatives at Worlds 2020, which will be their first-ever Worlds appearance in franchise history.

As for Gen.G, the team will have a second chance to earn a Worlds 2020 slot in the LCK regional finals, facing off against the likes of KT Rolster, Afreeca Freecs, and rivals T1.