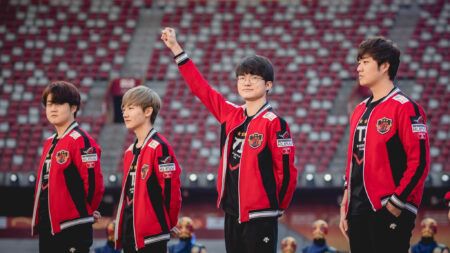 This Worlds 2020, Riot Games and the global League of Legends community are celebrating the LoL esports scene’s 10th anniversary. ONE Esports listed down five of the best gameplay moments from 10 great years of competitive League of Legends action — with unforgettable performances from icons like xPeke to three-time champions SK Telecom T1.

The oldest entry on this list dates back to Worlds 2015, when Summoners witnessed the rise of Spanish player Enrique “xPeke” Cedeño Martínez.

With power players like Smeb, ROX Tigers climbed their way through Worlds and became the underdog favorites.

In this gameplay, Smeb’s Kennen delivered the most beautiful four-man Slicing Maelstrom we have ever seen, which deleted G2 Esports’ Kim “Trick” Gang-yun, Luka “Perkz” Perković, and Alfonso “Mithy” Aguirre Rodríguez in one blow. PraY picked off the remaining G2 members and scored an Ace.

Who could ever forget this exhilarating base race from KT Rolster and Invictus Gaming during the Worlds 2018 Quarterfinals? Spectators practically held their breaths for nearly 40 seconds as IG and KT defended their respective Nexus. For KT, this moment was everything since IG was already ahead with two wins in this best-of-five series. Another loss would conclude their Worlds run.

In a play that would officially be known as “The Longshot,” ROX Tigers’ Kim “PraY” Jong-in landed the arrow of his lifetime against SK Telecom T1 in their matchup in Worlds 2016.

From SKT’s base, PraY cast Ashe’s ultimate ability Enchanted Crystal Arrow in the direction of Lee “Duke” Ho-seong’s Ekko who was performing a teleport at the time. After a thrilling seven seconds from the moment the arrow took off, it precisely hit Duke which delayed him from getting back to the base. This bought ROX precious time to deal damage to the rest of the SKT members and eventually destroy their Nexus and win the game.

With SKT getting enough crowd control over the Chinese team, Bae “Bang” Jun-sik’s Twitch followed up with his poisonous abilities Venom Cask and Spray and Pray, as well as Lee “Faker” Sang-hyeok’s Command: Shockwave. Han “Peanut” Wang-ho ensured that EDG had a hard time escaping by activating his Cataclysm to finish the wombo combo.