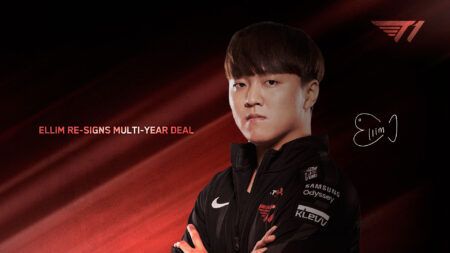 With the multi-year re-signing of Choi “Ellim” El-lim and the promotion of Moon “Oner” Hyeon-joon to the main roster, T1 is gearing up to field a 10-man roster for the 2021 season.

From the looks of it, the additional manpower on the roster will let T1 go beyond what they’re known for, which is Lee “Faker” Sang-hyeok. While the Demon King is by no means losing his touch in terms of gameplay, T1 opens up a lot of breathing space for him and the next generation of the team.

With Faker taking up his usual starting position, he’s able to surround himself with young talent in the form of Choi “Zeus” Woo-je, Lee “Gumayusi” Min-hyeong, and Ryu “Keria” Min-seok. On top of that, he’ll also get a chance to synergize with three different junglers who are probably meant for different playstyles.

While things are already looking up for another Faker-centric season, T1 has racked up enough talented rookies that can raise the T1 banner high without the legendary mid-laner. We’ve already seen T1 succeed with Lee “Clozer” Ju-hyeon handling the mid-lane and his possible substitution could provide Faker with some more downtime to focus on team analysis and PR efforts.

T1 may have missed their journey to Worlds 2020 due to an unfortunate Regional Finals finish, but it looks like the team is setting its sights on glory again with this 10-man roster.

If the Korean superteam can find the perfect balance that can implement the young guns well enough with their seniors, Faker and the boys might be looking to raise the Summoner’s Cup once again in Worlds 2021.