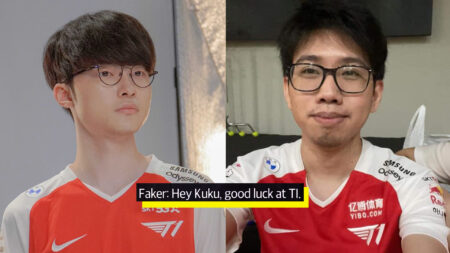 Accumulating three Worlds championship titles throughout the years, Worlds 2021 is going to be important for the team. They will have a shot at regaining their status as a legendary name in the League of Legends scene.

Meanwhile, T1 is a newcomer at The International. Four of the team’s members made their TI debuts this year, exceeding expectations by pulling off massive stats.

The two MOBA teams unite in a special video full of hopes and dreams.

T1 posted a short clip showing positive greetings from its League of Legends and Dota 2 teams.

“See you as champions,” said Faker.

The LoL squad also sent some signed jerseys to Kuku and his team all the way to Romania, TI10’s venue.

These teams are playing different esports titles, but are united with one goal — to become Worlds 2021 and TI10 champions.

“See you as champions,” agreed Kuku.

You can watch the full video here.

Catch more of Faker and the squad at Worlds 2021 live on Riot Games’ official channels on Twitch and YouTube.

Esports organizations participating at both Worlds 2021 and TI10

Other esports teams are also present in this year’s biggest MOBA tournaments.

READ MORE: T1’s 23savage reveals his formula for success as a pro player