A perfect opening for the G2 newbie. 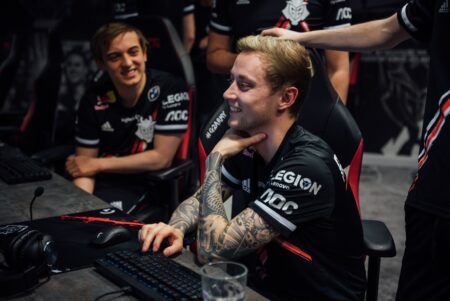 The 2021 League of Legends European Championship (LEC) Spring Split kicked off this weekend with G2 Esports and MAD Lions kicking things off.

The most anticipated performance of the season was the debut of former Fnatic star player and now G2 bot laner Martin “Rekkles” Larsson.

Rekkles took over from former G2 star, Luka “Perkz” Perković, after he said goodbye to the LEC and transferred to the LCS to play with Cloud9.

With Rekkles on the bot lane, G2 Esports was phenomenal during their first game against rookie team MAD Lions. The G2 bot laner produced a perfect, deathless KDA using Sivir and even pulled off this insane Mountain Drake steal.

Before signing with G2, the Rekkles-Hylissang bot lane duo was highly-praised by many but after seeing the Rekkles-Mikyx synergy this weekend, we’d have to say this pairing is insanely better.

G2’s first match of the year ended in victory with dominating stats from Rekkles such as a 28.9% damage percentage and a 78.3% kill participation.

It has only been months since Mikyx and Rekkles started playing scrims together, but we can already tell that a great season lies ahead of them with their chemistry. During the first day of the Split, Mikyx carried Rekkles to victory and the latter repaid the former’s efforts on the second day with this incredible save.

The result? Another deathless match from the Swedish sniper.

Of course with other reliable teammates like Martin “Wunder” Hansen, Marcin “Jankos” Jankowski, and Rasmus “Caps” Winther, G2 is already looking to be super stacked this season. G2 Esports ended their LEC opening week in a perfect 3-0 standing.

“We didn’t have the best early games, but in true G2 fashion I feel like we won anyways,” said Rekkles in an interview with Caps. There’s still certainly room for growth for this new G2 team composition, but for now, we’re giving Rekkles’ debut game a very high grade.

READ MORE: Rekkles on joining G2: ‘It’s an opportunity I had to take’