The Croatian player crosses the pond to return to the mid lane. 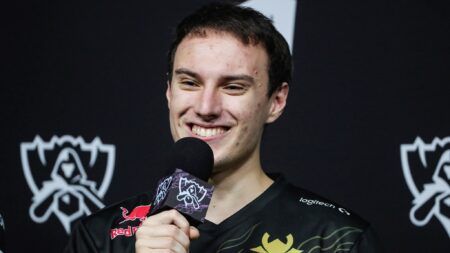 Cloud9 has finally completed its 2021 LCS roster with the addition of Luka “Perkz” Perkovic — all within the first week of global free agency. Prior to the move, Perkz left his EU home of G2 Esports after playing various roles in the past five years.

In the team’s announcement video (embedded below), Cloud9 hinted at Perkz’s buyout amount to join the team. C9 CEO Jack Etienne is seen talking on the phone, agreeing to a multi-year contract worth US$ 11.75M to acquire the Croatian player.

Cloud9 had a bittersweet end to its 2020 season. While the team returned to glory with an LCS Spring championship, many fans and analysts were hoping that they would carry the momentum into the summer.

C9 did exceptionally well in the first half of Summer Split with a nine-game winning streak, but once former coach Bok “Reapered” Han-gyu started experimenting with the team’s drafts, the championship team failed to conquer the playoffs, missing their chances to attend Worlds 2020.

As for Perkz, the multi-role player left G2 with a handful of notable accolades. Aside from G2’s known accomplishment as finalists during Worlds 2019, Perkz helped the team grab eight total LEC championships and MSI 2019.

Now part of the C9 organization, Perkz will reunite with former G2 teammate Jesper “Zven” Svenningsen as well as meet some of NA’s finest players in Robert “Blaber” Huang and Philippe “Vulcan” Laflamme. The mid-laner will also get to share his veteran experience and knowledge with rookie top-laner Ibrahim “Fudge” Allami.

As a high-profile player, Perkz made some bold statements about what’s about to happen to C9 in the future. With Cloud9 already having three trophies, he’s planning to triple it during his time with the team.

For 2021, he’s setting his sights on a perfect season with a 9-0 record in the Spring and Summer playoffs, topping it off with a Worlds victory.

While it may be a sad day for EU fans, Perkz reassured that this is the best way for him to grow towards his career-goals and his move should not be considered a sort of retirement.

As for his NA fans, the C9 mid-laner gave a brutally honest statement for his expectations of the league.

“I want to make NA great — not again, just great,” Perkz said with a smile. “It’s never been great before honestly so let’s start with simple steps.”