Peanut returns to the LCK with Team Dynamics

The way to a man’s heart is through his pets. 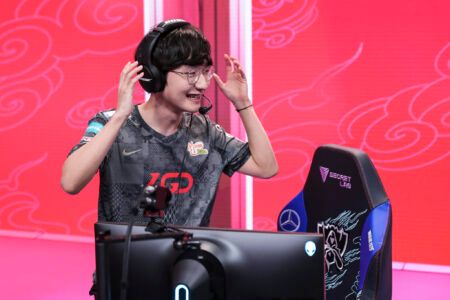 According to a report by Kim “kenzi” Yong-woo of FOMOS Korea, it is confirmed that former LGD Gaming star jungler Han “Peanut” Wang-ho has returned to the LCK to join Team Dynamics.

LGD Gaming announced on 19 November that they’ve mutually agreed to part ways with Peanut. Based on a translation of the article, Peanut received offers from LCK and LPL teams, but Team Dynamics stood out because they spoke to his parents earnestly and bought supplies and gifts for his cats.

After competing with ROX Tigers, SK Telecom T1, Kingzone DragonX and Gen.G in the LCK and at international tournaments, Peanut left and debuted in the LPL in 2020 with LGD Gaming. In his first LPL season, the team finished 15th out of 17 teams.

A roster shuffle brought in top laner Xie “Langx” Zhen-Ying, mid laner Su “xiye” Han-Wei, and support Ling “Mark” Xu. Together, LGD Gaming qualified for Worlds as LPL’s fourth seed. They went onto Groups after a successful Play-Ins run, but ended their journey in Group C behind Gen.G and Fnatic.

Peanut will fill the void left by Beyond in the jungle. Team Dynamics’ roster is still incomplete since Kuzan and GuGer left the organization, and it remains to be seen who will replace them. They are expected to formally announce Peanut on 29 November.