He will be the first to join the team in the off-season. 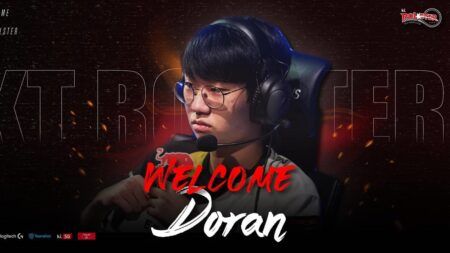 After releasing almost all of its team in the off-season, KT Rolster begins its 2021 roster rebuild by acquiring Choi “Doran” Hyeon-joon.

Doran had a breakout 2020 season with DRX, as he reunited with his ex-Griffin teammates Jeong “Chovy” Ji-hoon and coach Kim “cvMax” Dae-ho as they rose to the top of the LCK.

The young and hustling squad took third place in the Spring Playoffs and second in the Summer Playoffs, securing a group stage appearance at the 2020 League of Legends World Championship.

After a solid 4-2 group stage appearance that saw them take one game off LPL’s first seed Top Esports, the team was eliminated following a hard-fought loss to eventual Worlds 2020 champions, DAMWON Gaming.

As for KT Rolster, the organization enters the new 2021 franchise format as an expected mid-table contender. While the team has had occasional success with its glass-cannon approach, the team failed to put up a fight against more rounded teams like T1 and DAMWON Gaming.

Doran will be joining Son “Ucal” Woo-hyeon as the second member of the reformed KT line-up. While the two are naturally talented players, Ucal and Doran are still young talents who need guidance and support to truly flourish.

If the organization is looking to bolster its chance as a title-ready team, KT Rolster will have to bring in some experienced veterans to help the two out in forming KT’s 2021 identity.