Gen.G adds depth to their rotation. 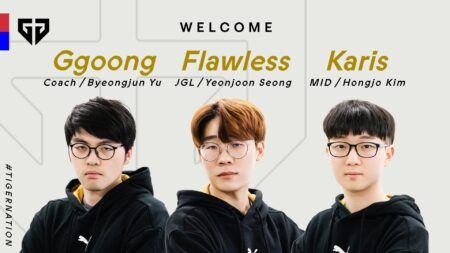 In an effort to build a more robust and stable team for 2021, Gen.G has recruited some new faces in assistant coach Yu “Ggoong” Byeong-jun and jungler Seong “Flawless” Yeon-joon.

Looking back at the 2020 season, the LCK team came out strong in the regular season but disappointed in both playoffs. While the team had an easy time entering Worlds 2020 as the LCK’s third seed, Gen.G’s usual style of slower-paced gameplay was countered by G2 Esports’ offensive pressure and led to an early exit in the knockout stage.

With Gen.G bringing Ggoong in, we may see Gen.G pick up the pace with Ggoong’s experience in the fast-paced LPL. On top of that, Ggoong also acted as an assistant coach to Top Esports, the LPL’s first seed into Worlds 2020.

“Coach Ggoong brings with him a great deal of expertise from TES,” said Gen.G. “He will also be imperative in our endeavor to modernize our in-game approach by incorporating some of the best practices globally.”

As for Flawless, the Korean jungler showed solid signs of consistency in his previous team of SeolHaeOne Prince, coming sixth in damage (14.5%) and third in wards per minute (0.65%) for the jungle position.

While Flawless was one of the better players on the team, SP didn’t provide him with much support and was barely able to break their bottom-table standings, finishing Spring in seventh and Summer in tenth place.

Now that he’s in Gen.G, the promising player can now take notes from the region’s best jungler and First Blood King, Kim “Clid” Tae-min. While it might take some time for Flawless to take some minutes away from Clid, he’ll likely act as a sub-jungler with a wider, unorthodox champion pool to test their opponents.

“Flawless will help round out our roster and give the team flexibility to broaden its horizons in terms of strategy and playstyle during the season,” said Gen.G.

Along with the two known recruits, Gen.G promoted Academy mid-laner Kim “Karis” Hong-jo. Similar to Flawless, Karis will likely act as an understudy to the high-profile mid-laner Gwak “Bdd” Bo-seong.

With Gen.G being more focused on being solid Worlds contenders, we could possibly see Karis taking a starting position to give Bdd more time to analyze the opponent mid-laner without revealing his playstyle.

With the three, Gen.G will likely stray away from the traditional ways of the LCK and opt for a newer, fast-paced mindset heading into Spring 2021.