They tested negative on finals day. 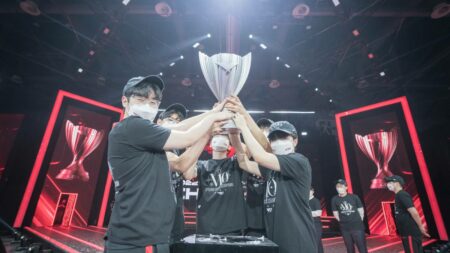 Four T1 players, including legendary mid laner Lee “Faker” Sang-hyeok, and a member of staff, have tested positive for COVID-19 on Sunday, a day after the organization won their 10th LCK title after defeating Gen.G 3-1.

The infected players and staff will be quarantined and treated at the team’s accommodations until April 9, T1 stated. Their HQ facility will be thoroughly disinfected as well.

T1 CEO Joe Marsh confirmed that the players and coaches had all tested negative on Saturday.

“For those asking, we had negative tests prior to final on Saturday. We would never knowingly put others at risk,” he tweeted.

Even though the players had tested negative, some of them had reportedly felt unwell during the final. Oner revealed in an Instagram post that he only managed to sleep for one hour the night before.

Regardless of the team’s condition, they overcame a determined Gen.G that has yet to win an LCK title. For Faker, it was his 10th LCK title since he debuted with SKT T1 in the summer of 2013.

The team will represent LCK at the Mid-Season Invitational 2022, which will be held in Busan, South Korea from May 10 to May 29.

READ MORE: MSI 2022 will be held in Busan, South Korea with a live crowd