Cloud9 continue their domination of North America in week 5 of the LCS Spring Split. 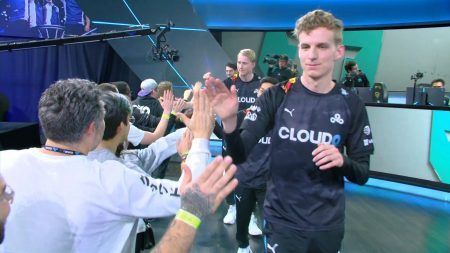 At the conclusion of LCS Spring Week 5, league leaders Cloud9 continue their stellar season with another perfect week.

Match of the Week: Golden Guardians vs 100 Thieves

Our match of the week goes to 100 Thieves vs Golden Guardians. 100 Thieves clinical dissection of GG’s poke-heavy team was a joy to watch, with the team choosing their initiations well and displaying excellent synergy in team clashes.

In this highlight play, 100T use a two-pronged attack to assault GG in both the top and bottom lanes.

With William “Meteos” Hartman and Kim “Ssumday” Chan-ho isolating Kevin “Hauntzer” Yarnell in bot lane, the rest of 100 Thieves swarmed to the top lane for a quick ambush.

100 Thieves would eventually win the match with an ace, ending with 15 more kills and 10K gold over Golden Guardians.

While mid-laner, Søren “Bjergsen” Bjerg, is usually seen as TSM’s super-carry, Kobbe stepped up to the plate in their recent match against Evil Geniuses. With his locked and loaded Tristana, Kobbe claimed five out of TSM’s eight kills and ended the match with a 700 gold bounty.

Aside from clearing lanes and towers with unbelievable speed, Kobbe dealt tons of damage to his opponents. In the highlight play, Kobbe solo-killed Daniele “Jiizuke” di Mauro with only three auto-attacks.

With the Spring Split halfway done, Cloud9 stays in the lead with a 10-0 record while FlyQuest comes out in second place (7-3).

TSM follows right behind with a 6-4 standing while Immortals and Dignitas stay even on the leaderboard (5-5).